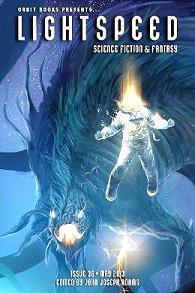 “The Traditional” by Maria Dahvana Headley
“Always, They Whisper” by Damien Walters Grintalis
“Water Finds Its Level” by M. Bennardo
“Leaving the Dead” by Dennis Danvers

“The Traditional” by Maria Dahvana Headley

Second person point of view is hard, but when it works, as it does here, it facilitates the story without calling attention to itself. This is an end-of-the-world story about a boy and girl who meet right before the apocalypse occurs. Alien worms take over, eating everything in their paths and growing to menacing proportions. The narrator shares vignettes from her relationship with the boy she met that night. For anniversaries, they give each other nontraditional gifts such as pieces of their flesh or combs made of finger bones. As the couple survives the years, the worms keep growing, forcing the world into hiding. Like the other survivors, the boy and girl stay indoors until they simply have to go out. A satisfying and easy read.

In this revisionist version of the Medusa story, she is not beheaded by Perseus, but raped by Poiseidon. And that is where the tale begins. This Medusa’s curse is that she attracts men, turning their hearts to stone, and their minds to compulsive lust. She has taken refuge in an urban apartment where she pays the bills by translating ancient Greek texts that are delivered to her. Rarely does she go out, and when she does, she is obsessive about dressing in scarves, sunglasses, and frumpy clothes so as to divert attention from herself. She even takes a potion to change her appearance and make her look old and ugly. When the potion stops working she is forced to find other means of dealing with not only her curse, but also the snakes that writhe and whisper that the situation is all her fault. An ethical commentary on victim-blaming.

When Jennifer first hears the disembodied voice in her kitchen, it scares her so much that she drops her casserole and doesn’t venture into the cooking area again for three days. Then she learns from a newscast that she’s not the only one hearing voices where there should be none. Apparently her world is colliding with a parallel world and things are overlapping. In the other universe, in the space corresponding to her own, lives Roger. As the two worlds grow closer, so do Jennifer and Roger. One day the worlds become one and the two are able to cohabit. As the worlds settle into their new merger, some people who exist in both worlds are drawn to meld into one. An interesting “what if” conjecture.

“Leaving the Dead” by Dennis Danvers

Darwin and Gabriella are the last man and woman alive after everyone else mysteriously dies. They meet when Darwin brings his purchases to her register at the Target store and calls her name aloud to keep her from joining the dead. The omniscient point of view here reads like head hopping, sometimes between one sentence and the next in the same paragraph. Then there’s Elvis, a seeing eye dog who joins the humans. His part of the tale is told in present tense which adds to the jarring narrative throughout the tale. Nothing particularly interesting happens here. Darwin and Gabriella meet, hang out together, and get a dog. Dry, boring, and long.