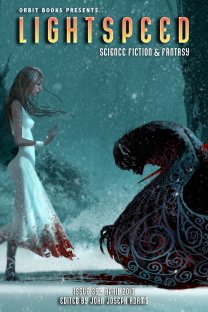 Once upon a time, as Karin Tidbeck relates in her story, “A Fine Show on the Abyssal Plain,” there was a theatre troupe. Its members were so obsessed with their performances that nothing else matters to them but the play. Of course, what is a show without an audience? A single spectator to watch them perform endless variations of events that they claim actually happened is enough to thrill the players. There is a sex scene here that felt gratuitous. Not until the end does this story reveal its speculative fiction bona fides. This is horror light. Readers who enjoy speculative tales about the theatre might enjoy this.

Anaea Lay’s “The Visited” is a prosaic eulogy in the form of anecdotes, interviews, quotes, and song lyrics. It celebrates the life of Manuel Black, a talented musician who, during his tempestuous life, served as a lightning rod through which the population could grok the Visitations, presumably by otherworldly beings, that occurred several times in Black’s lifetime. Despite his birth circumstances, Black grows up to become rock-star famous and charismatic in a way that makes people want to hang out with him just because. This is an artistic commemoration of an artistic life.

“It was a crystalline morning in early June, and the sky was wide as a saucer.” What a wonderful first line for Desirina Boskovich’s “Deus Ex Arca.” This is a story about magic, how it touches our lives, how simple it can be, and how little we understand it. Jackson Smith, the hero here, is our tour guide, showing us how little we know when he unwittingly forms an attachment with a benign-looking box he finds at a neighborhood farmers market. A wonderful story with a great opening line, an excellent cast of characters, and an unusual box.

“Deep Blood Kettle” by Hugh Howey is about an imminent meteor crash as seen through the eyes and experience of a young boy. The boy’s teacher, Mrs. Sandy, informs her class about the coming event. The boy’s Pa, however, doesn’t believe in things he can’t see. Scientists and television anchors are discussing the meteor daily. Soon, even Pa has to admit that something bright and shiny in the sky is getting closer all the time. A fast read with many farming metaphors.