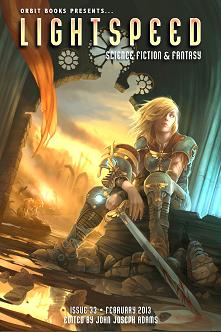 “The Infill Trait” by C.C. Finlay
“Abyssus Abyssum Invocat” by Genevieve Valentine
“Harry and Marlowe Escape the Mechanical Siege of Paris” by Carrie Vaughn
“The Herons of Mer de L’Ouest” by M. Bennardo

The February issue of Lightspeed gives us a hodgepodge of fantasy, alternate history and near-future science thriller that makes for a rather disjointed read. The tales are written by two up and coming authors, and veterans Charles Coleman Finlay and Carrie Vaughn, who unsurprisingly turns in one of the best of the bunch.

“The Infill Trait” by C.C. Finlay

The story opens with the narrator taking possession of the body of a 12 year-old Indian boy in the middle of an airport. We soon find out the narrator is James van der Leur, a barely sane intelligence officer who jumps bodies every time he falls asleep. The story packs in quite a bit of suspense in its short run and reads like a chase scene from a much larger story. While body jumping is nothing new to the genre, “The Infill Trait” goes a more menacing route. There are two major faults of the story that kept it from working. First, the frantic phone calls James places to a scientist who may be able to offer insight to his predicament are never adequately explained and results in some atrocious psycho-losing-his-mind dialogue clichés. Second, instead of the truly sinister ending that could have redeemed the over-the-top story, we are given a cheesy fourth wall break that wouldn’t be considered threatening even in a Goosebumps book.

Genevieve Valentine, author of the excellent Nebula-nominated dark fantasy novel Mechanique, gives us yet another variation on the Little Mermaid fairy tale, and within the story, several other iterations therein. In this recitation, a plain-looking schoolmarm, Miss Warren, appears in a small town and strikes up a curious relationship with Matthew, a sixteen-year-old student. He becomes enamored with Miss Warren’s retellings of the classic mermaid story, even though the teacher rebuffs his attentions while warning him of the power of the fairy tale to drive one mad. We see Matthew’s obsession grow while Miss Warren’s intentions remain ambivalent. The story has some evocative moments, but the structure of the story is often jarring. The author does too much to obfuscate the characters and story, making this one for die-hard fans of mermaids (there have to be some of you out there, right?) or the willfully obscure only.

An alternate history fantasy set in Europe during a World War. However, instead of the expected German invaders bombing France we also get insect-like mechanicals that serve as the German ground force, using something called Aetherian technology. Our plucky heroine is Harry, a princess in her own right, and the sister to George, the heir apparent to the British throne. Harry is thrust into danger after a diplomatic mission to France turns into a warzone and she is left behind to make room for the Crown Prince to escape safely. This is a character-driven story full of humor and a whiff of romance, which is what Carrie Vaughn does best. The only problem with this fine tale is that it reads like the first chapter of a great book, so you’ll certainly want more.

“The Herons of Mer de L’Ouest” by M. Bennardo

Armistead is a French Canadian trapper in the middle of the 18th century coming to terms with the death of his Chippewa wife and child by giant, seemingly carnivorous herons. The actual story takes place somewhere in the Pacific Northwest in a mythic land that is part of the Northwest Passage. As Armistead tracks the birds that murdered his family, Bennardo slowly unfurls the man’s grief and his horror at the truth behind these foul birds (I couldn’t help myself) that mirrors his search for the fabled Passage. It’s a quiet tale with explosions of violence that give the story a tense atmosphere.