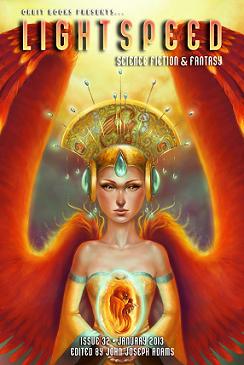 “With Tales in Their Teeth, From the Mountain They Came” by A.C. Wise
“Purity Test” by Kristine Kathryn Rusch
“The Sounds of Old Earth” by Matthew Kressel
“Lifeline” by Jonathan Olfert

This month’s Lightspeed starts off the new year with four new stories about transformation and change.

Like Ray Bradbury’s Fahrenheit 451, “With Tales in Their Teeth, From the Mountain They Came” by A.C. Wise has the burning of books as a critical plot element. Ms. Wise treats the topic from the perspective of two Librarians determined to save their books by doing much more than memorizing them. The story begins with an unnamed protagonist who never gives voice to the romantic words, “I love you,” until it is too late and her lover has gone off to war. When she finally does speak the words, she realizes that he is dead. With nothing to keep her there, she abandons her house by the sea and sets out for the Library on the Mountain. There, she is given a new name, Alba, and a new purpose, caring for some of the books. It is in the course of this duty that she meets the Novice, Eleuthere. When Alba learns that the Librarians are willing to save their charges any way they can from the soldiers they expect to burn the library, she decides to join them. The story is a celebration of commitment to words.

You know what they say about unicorns and virgins? Me too. So Kristine Kathryn Rusch’s story, “Purity Test,” came as a pleasant surprise. Our hero here, Micheline, is the daughter of a lord who, after his wife’s death, consorts with an evil magician, Sutton. Mr. Sutton is granted property and buildings for his work. When it comes time for Micheline’s brother to wed, Sutton is put in charge of examining the eligible girls (some of them as young as ten) for purity. Her father enlists her help to brew a sleeping potion to give an unsuspecting and uninterested prospect, Opal. Micheline spies on her father and Sutton and learns how they are testing. She sees the unicorn, or rather she tries to keep the unicorn from paying attention to her, for the first time. Unfamiliar with such creatures, it is not until her own betrothal to Roland that she is forced to face it. When the unicorn turns away from her and both her father and betrothed decide that she is a whore, she runs away. The story is told from the present perspective with flashbacks to past events that lead us full circle and beyond.

In some apocalyptic future, Matthew Kressel’s Earth is dying. Residents are evicted from their homes and relocated to places like the Wal-Mart Toyota Orbital and the Google-Wang Colony. Many, including the hero, Abner’s family, are settled on New Earth. Abner is a hold-out who doesn’t want to leave Earth, though environmental toxins have made the planet uninhabitable. He stays on the land that has been handed down through his family for generations and maintains a stascreen to keep the air as clean as he can. When it rains, he can hear the frogs in his pond croaking out their mating calls. After a visit to his family on New Earth, and a visit from his granddaughter, Rachel, back on Earth, Abner resigns himself to leaving. He sets fire to his ancestral home and waits for the inevitable eviction. When it happens, he’s transported to New Earth on a prison ship. There are some things, like “The Sounds of Old Earth” that are forever gone. While nothing can replace them, family is family and New Earth does have its charm.

“Lifeline” by Jonathan Olfert is a speculative fiction blind date gone wrong. Habiba and Gereth are matched by the Lifeline service. She’s gay, poor, and brown-skinned; he’s married, wealthy, and a fair-skinned Norwester with children, one of them an adopted brown-skinned boy. Neither of them is looking for partnership—both of them are looking for a connection. Each of them is familiar with other people who used the service and found anything from lovers to enemies. From the moment they meet, it’s clear that whatever connection Habiba and Gereth do have, it’s complicated at best. And it goes downhill from there.