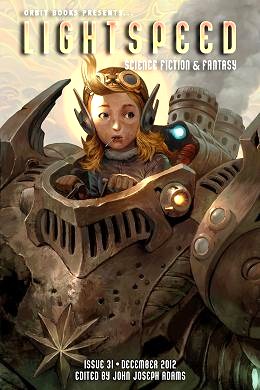 This issue of Lightspeed contains a diverse selection of SF and horror short stories.

Dwayne Minton’s “Dreams in Dust” hooked me by the opening scene, a seventeen-year-old girl wielding her rifle with ease in the wastes of the Atlantic Ocean. Earth is dying, a world without water. Keraf carries a secret—plans to drill into the rumored deep ocean. But he has been captured during his mission to deliver what he knows and only has hope to trade for his life against the cynical practicality of his captors, hope embodied in a child urinating in the sand. Powerful imagery.

“American Jackal,” by J.T. Petty, tells the story of David, a lying drifter, and Maribel, both struggling with life and extremely dysfunctional families. Living on the edge like “two animals wrestling in a bag,” Maribel’s brother deep into meth, David’s who had pushed him off a roof just to see him fall. Except Maribel is more than she seems. This horror story steadily drew me in and kept me turning pages until the end. Well crafted. I couldn’t stop reading even if I’d wanted to.

Ken Liu’s “The Perfect Match” asks the inevitable questions—at what point does technology designed to help humans become our master, and once we discover this, is it better to destroy it or make it a better partner? Tilly is life coach and world’s best assistant, an AI for everyone who uses the Centillion system with its omnipresent monitoring cameras. Tilly suggests what Sai should wear and places to eat, recommends girlfriends and options for leisure activities. Except Sai’s neighbor, Jenny, believes Tilly tells everyone how to think. Jenny’s ideas slowly create doubts in Sai’s mind until he tries to turn Tilly off and finds there is a “safety failsafe” that turns it back on. Together they try to destroy Tilly, but fail, only to learn that the perfect match is something they could never have imagined. Liu’s work consistently peels back the illusions of our daily lives to challenge our perceptions of reality.

“St. Polycarp’s Home for Happy Wanderers,” by Sarah Langan, is a coyote-friendly horror story. Sheila’s been shipped off to an orphanage in Maine by her father because he’s not sure he can protect her any longer from the howlers. She hates it, is teased mercilessly by the other kids and beaten by Sister Rita, who claims Sheila’s father is dead or in jail. Her true nature breaks through when she gets angry enough and her sharp, canine teeth bite. The howlers eventually come for her, but they are her sisters, and half-aunt who says, “Coyotes survive anything. We mate with dogs. Wolves. Lawyers. The rest of the world is limping toward apocalypse, but we keep getting stronger.” In the end Sheila must decide between life with her pack family as a mostly-coyote or life as a mostly-human with her father who finally rescues her. An enjoyable read, rooting for Sheila the whole time.