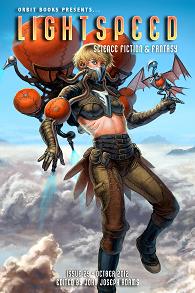 “Bear and Shifty” by Benjamin Parzybok
“Spindles” by L.B. Gale
“The Suicide’s Guide to the Absinthe of Perdition” by Megan Arkenberg
“Flowing Unimpeded to the Enlightenment” by Robert Reed

Whether or not by design, this month’s Lightspeed stories share the themes of insight and enlightenment.

“Bear and Shifty” by Benjamin Parzybok is a solid humans versus aliens story. Bear is a large human trying to do a little bit of good in a post-apocalyptic world. Shifty, initially thought to be a down-on-his-luck survivor, turns out to be a back-stabbing, accidental alien. Their meeting establishes the starting line of a life-or-death chase that ends, as these things often do, with collateral damage and death. That, however, isn’t the end of the story. In fact, it seems almost anticlimactic in service to the revelation of why it had to happen and what it means for the future. Mr. Parzybok has delivered a good, fast read. He ends it by giving us a moment of transcendent introspection, the loss of which is telling.

L.B. Gale’s “Spindles” is a fantasy tale that takes a circuitous route between “once upon a time” and “the end.” The story is told through the eyes of a child, Evelyn, who keeps losing important things like the smells of certain foods, or the taste of money. Each series of losses is a single revolution of a recurring sequence of events. I found the number of revolutions so staggering as to be unbelievable. As the reason for Evelyn’s losses becomes apparent, she gains insight about what is happening and tries to alter the outcome. Some of her experiments work; some don’t. At the end, the question of whether or not Evelyn will ever live “happily ever after” is left unanswered. Though the ending is ambiguous, Ms. Gale does a decent job of exploring the journey along the way.

It seems only fitting that Megan Arkenberg’s “The Suicide’s Guide to the Absinthe of Perdition” is set against a backdrop of the fallen angels and useless humans who reside in Hell. In this prosaic tour guide, with its hints of local flavor, the regional traditions are interspersed with lessons about living in Pandemonium and guidance on the many ways to drink absinthe there. Each method is more poignant, and more likely to result in opening the mind, than the one before. Ms. Arkenberg ends the tale with a surprise—an unexpected truism that goes well with the titular liqueur and lingers like the taste of wormwood.

“Flowing Unimpeded to the Enlightenment,” Robert Reed’s highbrow cyberpunk, is not the gritty stuff of William Gibson. This is cyberpunk with piezosuits, multimillion-dollar publicity stunts, and insider trading where contact with alien worlds is the commodity. The setting is one where being able to tell what weapons someone is carrying takes little more than a glance across a crowded room. The title’s Enlightenment, with a capital E, refers to a place that knowledge is happiest flowing toward; the story’s enlightenment takes Kartar, the protagonist, on an unexpected trip through his past en route to his future. While Mr. Reed’s tale stands alone quite well, it also feels like it could be the first part of a longer work.