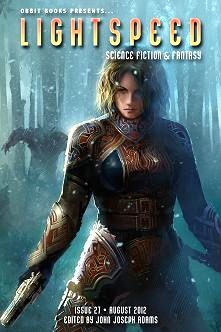 “Breaking the Frame” by Kat Howard

A dialogue between artist and model, interleaved with descriptions of the photographs they make together, all with mythological themes, most of them produced with risk to the participants.  Over the course of their relationship, the model’s will begins to appear asserted within the frame of the photographs, a magical transformation unexpected by both parties, but not unwelcomed by either.

Of course, the tension between the artist and the subject—especially between male artist and (often nude) female model—is among the most fruitful in philosophy and criticism, and here Howard has chosen to show this relationship in a different light, an oblique angle.  The model doesn’t have to be a passive conduit for the passions of the artist, though she remains one for the will of the viewer.  The receiver of a work of art is the third base of the triad, an interpreter no less essential to the artistic impulse than the other two.  Francesca’s liberation out of the glossy plaque of her image must be perceived by someone; her assertion of will judged, and found wanting, or not, by alien minds.

Thus we make of reality—and fantasy—what we need from it.  Some may see beauty, others horror, still others farce, in the same work.

“A Moment Before It Struck” by Linda Nagata

In a fantasy realm at war, a young demon in human form confronts his essential nature: is he an agent of his own volition, or is he simply a weapon of his father’s, to be diposed as his father sees fit?

On a generation starship a girl struggles to maintain her identity—literally—among a crew full of tank-aged and memory-imprinted people who share a common childhood, the recorded experience of The Child, a boy named Nick who lived early in the voyage and has been stored in a vat for many years.  Just as our heroine is beginning to assert her independence, Nick is de-vatted with the hope of recording his adulthood, as well.  The two teenagers meet cute and fall into a familiar pattern of rebellion and doom.

Much of this background is assumed, as Connolly and Yoachim are niggardly with details: this is not your grandfather’s generation starship story.  Aside from declarative statements informing us of the fact, we never get a sense that the mise en scene is a ship, which for me is essential to the trope.

Which is too bad, at least for my taste.  I admit being disappointed by this story: a promising start of intriguing nova and sfnal weirdness fizzles into pat twee bildungsroman warm and fuzzies.  The modern anxiety of conforming to a social standard, and the inevitable-seeming similarity of the maturation process across generations are brought to a queer sort of apotheosis here, literalized in a uniquely sfnal way, but all that material becomes secondary to the burgeoning romance between the leads, and a facile ending which eases all the tension, and leaves the explicitly-identified pistol unfired.  I think a more discursive and rigorous approach would not only have satisfied my desire for a good generation starship tale, but would have made for a more satisfying narrative arc.

All that said, my main objection to this story is the fundamental concept.  Why this strategy of giving everyone on the ship the same childhood, despite the fact that they all have individual personalities?  Who elected to follow this strategy?  Where are all these freakishly-similar people going?  Is the vatting technology akin to the old corpsicle hibernation trick?  Why would the earlier people have chosen to give everyone—male and female alike—the same memories of a male child and not gender-specific experiences in the first place?  Why is all this happening the way it’s happening?  The set-up is contrived, and absent any rigorous explanations, nonsensical when examined more than briefly.  What’s it like on a spaceship?  This story makes it seem like living in a residential mall in Minneapolis.

In short, the story’s brevity works against it; a good science-fiction story needs space to extrapolate, some lebensraum in which to establish premises and fill in the background.  There’s certainly enough material for a much longer story, though I hasten to add that a four-volume series is not what I have in mind.  A 20K word novella would clinch it.  I’d hoped the internet would empower the novella length, but I haven’t seen much evidence of that yet.

“The Bookmaking Habits of Select Species” by Ken Liu

This story is in a form which resembles an abecedary.  It is a discursive form, a narrative-ish list which requires a framing device in order to properly function.  This story is almost perfect, but the frame is weak.

Given the subject matter, perhaps we should call it a Stapledonian catalog.  What Liu has presented is a list of several species and descriptions of the way they gather and preserve their written languages.  Absent a strong framing device, the choices of examples are arbitrary, and Liu roams about the galaxy, and all of those forms of “bookmaking” described fit together loosely into a thematic whole.  The descriptions are lovely and the examples are illustrative of Liu’s intent to explore the nature of writing, what it means, what it does, what it’s for, and why various kinds of minds want to preserve it.  What the story needed in order to feel less like a lecture is a more incidental frame: the species of the Orion arm, for instance, or of a certain type of star.  A few non-pointed examples to help sharpen the point of this exercise.

There is also a disembodied feeling to some of the descriptions.  Some more detail on the somatic presence of these ETs might enliven the dry, academic aspects of the work.  Surely the physique plays a part in the writing porcess.

When you work at this level of craft you find that a story is such a delicate creature that a single italicized word can hinder it, or rend it completely.  Though fine, and containing marvels, this story does not quite attain its maker’s ambition.  He’s caught a big one and he knows it, but he must commit if he wants to land that fish.  You have to commit to the bit; laughing at your own jokes does not make them funnier.