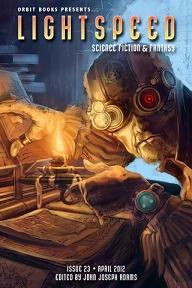 “The Sympathy by Eric Gregory
“Forget You” by Marc Laidlaw
“Ruminations in an Alien Tongue” by Vandana Singh
“Nomad” by Karin Lowachee
“Mother Ship” by Caroline M. Yoachim

“The Sympathy” is the story of Lauren, who up and leaves her relationship and just goes on a road trip.  She meets Madison at a truckstop and is persuaded to give her a ride, despite the fact it’s in the opposite direction.  In the course of the journey, she discovers that Madison in on the run from some supernatural forces, and that Lauren just might be the key to stopping them.  Eric Gregory has crafted a story with two very interesting protagonists and some very good fantasy concepts.  I found the ending a bit abrupt, but otherwise, this is a fine story.

Mark Laidlaw‘s “Forget You” starts with an intriguing premise.  The protagonist is in a relationship with a woman, but realizes he doesn’t remember how it all began.  As he goes to discover the mystery, he begins to wonder exactly what the woman is. I found the story too existential for my tastes, though the ending deals with the mistake of looking a gift horse too closely in the mouth and gives a glimpse into human nature.

“Ruminations in an Alien Tongue” focuses on Birha, an old woman waiting for the return of the man who loves.  It’s set in a complex multiverse, where Birha has lost her lover, who accidentally was sent into a different universe by a device that changes the probabilities.  In a sort of exchange, Rudrak shows up at her door.  Rudrak has been transported to Birha’s universe and is looking for his lover Ubbiri, and keeps being sent back only to return.  Vandana Singh‘s story is weighed down by long passages that spend too much time describing the characters’ states of mind, along with tons of information dumped on the reader, and it doesn’t help that the main concept immediately brings to mind Douglas Adams’ improbability drive, which breaks the mood.  I found the story very slow going and and uninvolving.

Karin Lowachee writes about a new version of Heinlein’s power armour suits in “Nomad,” where the suits are sentient and bond for life with their wearers, turning into a “fuse.”  In the case of the main character, Mad, his human half, Tommy, is dead and he has to learn how to deal with it, deciding to turn nomad and live away from his unit.  But things are complicated, including the fact that things are not what they seem.  Lowachee does a good job of painting this society and the concepts of honor that keep it together. The story is also appearing in John Joseph Adam’s new anthology, Armored.

“Mother Ship” takes its title literally, with the tale of a sentient starship carrying colonists to new worlds.  This ship is in love with its passengers which leads her to take actions. Caroline M. Yoachim gives the ship a personality and shows the possibilities of a mother’s love, but certain elements are introduced and need further explaining.