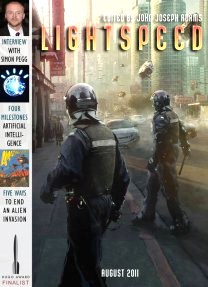 “Defenders” by Will McIntosh
“The Nearest Thing” by Genevieve Valentine

Starting off this month is “Defenders” by Will McIntosh.  We are immersed in a world where an alien race invaded and took over the planet.  The humans were unable to defend against them, since the aliens could read our thoughts and predict our every move.  However, at some point before their arrival the humans had built a race of giant robotic beings they called “Defenders” that were quite capable of defending them from the invaders.  However, once the invasion was thwarted, what were they to do with the sentient machines?

Why, you give them Australia!  Yep, move the humans out, let the robots take over.

We join the main character, Lila, who is part of the diplomatic group sent to see what has become of their creations after almost three decades of isolation.  They find a rather boring place that is just a larger version of the human world they know.  Since the machines only have their own creators as a guide, they live like the humans.  Only, they are massive and have very dangerous weapons all over their body.

The story takes some rather unexpected turns as diplomats die in horrible ways, and we discover the aliens are now slaves to the Defenders.  What starts is a journey into what I thought would be an exploration of a robotic society, but instead turns into a rather weak story about how the robots plan to claim more of the world for themselves, and how the aliens will assist the humans in stopping the robots.  The strong start on this story falls flat when we come to realize that the humans are just there as hostages.

Overall, “Defenders” is a decent read, but nothing to get excited about.

The other piece of new fiction this month is “The Nearest Thing” by Genevieve Valentine.  This is a dark and interesting tale about a man, Mason, who works for a company that makes replicas of people who have died, so the family can still have the person around for a little while longer.  It’s a creepy way of helping people get through the death of a loved one.  However, someone in the company comes up with an idea to spread out into making replica people just to have around for companionship.  Mason, the company’s golden boy programmer, is added to the project to make it the best it possibly can be.

What follows is creepy, uncomfortable, and extremely human.  Mason finds himself drawn to the protoype, and an odd love triangle partially forms.  Jealousy, rage, love, and an entire host of other emotions flow from this story.  In the end, I came away from the tale feeling a bit strange.  However, upon further reflection, I discovered that the story remained with me, lingering in my memory.  I realized that this is a story that everyone should read, no matter if you are a fan of science fiction or not, because the message within its bounds is deep and profound.

Go read this story now.  It will be one less item to add to your reading list at award time next year.