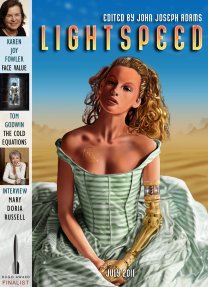 
“The Old Equations” by Jake Kerr is about the first manned mission in a “faster than light” craft. It is a sort of alternate history SF, in that Einstein was considered a hack, and thus the relativistic effects of near-light speed travel weren’t accounted for when planning the mission.


Kerr tells the story using the communication records between James, the astronaut, his wife, Kate, and mission control. The dramatic irony of what the audience knows compared to what the characters expect keeps the emotional tension rolling as they come to grips with what exactly is happening–that James will be gone 40 years, not five.


It is a story curiously without conflict. The relationship between Kate and James does not suffer for what happens, nor does he rail against his fate. Mission control does not try to avoid blame, or assign it elsewhere. It is almost Pollyannaish in how the old equations, as they’re called, affect the characters. I believe Kerr used this lack of conflict to focus the emotional impact of the story on the technological premise, but the characters are not changed by what has occurred, only grieved. It is also possible that these are all unreliable narrators; after all, the communications were recorded and the characters knew this. Whatever the reason, I found the displayed perfection of the characters frustrating.


“Sweet Sixteen” by Kat Howard is about a girl who is about to turn 16 and choose how her genetics will be restructured. The premise is that at 16 years old, people decide who they will be, and receive genetic counseling in order to fill that role. Marthas tend to be homemakers, Julias are cooks, Marilyns are tragic figures, Carolines are astrophysicists, and Tiffanies are B-movie stars. Star, the main character, wants to be a Tiffany, but, “The thing was, Tiffanies weren’t needed. They were the girls who were cute, who entertained, who were B-list and gossip fodder.” “Sweet Sixteen” is about how Star decides who she will be for the rest of her life.


I liked it. The act of deciding one’s future and the way that the weight of that act is sometimes lost on us in the moment is a theme that speaks to me. On the other hand, I dislike SF that presents single-gendered pictures of the future, and Howard’s universe has no gender besides female. It was a disappointing detail in an otherwise excellent piece.