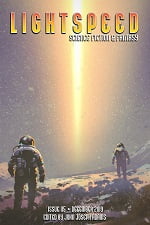 There are four original stories in December’s issue of Lightspeed. One note of caution, though—sensitive readers may find the references to sex with wolves and other sexual acts, albeit mostly vague and non-detailed, a little off-putting.

In compliance with the law as laid out in the Father’s Rights Act and the Sanctity of Motherhood Act, the Senator who proposed and championed both bills had been caught messing about with an intern. A month after she leaves her position, the good Senator is on the receiving end of a very unusual phone call and some incredibly apropos karmic justice.

When I first began reading Murphy’s story, I wondered how it fit into the SF genre. It becomes apparent about mid-way through and it’s an incredibly satisfying twist, to say the least. The author’s treatment of an old cliché (that of a trifling politician) is unique. The entire story is nothing more than the one-sided transcript of a medical official relating the news to the Senator but it gets the point across very well. I quite enjoyed this tongue-in-cheek tale.

“The Path of Pins and Needles” by KT Bryski

In a northern village long ago, a young girl dreams of wolves. She watches for them as she walks the forest path while carrying a basket of goodies to her grandmother’s house. She does so even as she spends a moment of passionless intimacy with the boy she’ll eventually marry. The girl longs for the wolf’s embrace but there are rules—old rules that forbid such things. As the years pass, she continues to dream of wolves until, one day, they come for her.

This story is an interesting adaptation of the old fairy tale “Little Red Riding Hood,” also often called “Red Cap.” It’s pretty clear that Bryski followed Charles Perrault’s 17th century rendition to a point, as well as the ancient symbolism found in both Perrault’s version and earlier iterations. Everything, from the color of the hood to the forest and wolves, is symbolic of something much greater. For example, the red hood that we are all so familiar with is an invention by Perrault and used to communicate something about the girl. For centuries before this, the color of the hood was usually gold. The two colors communicate very different messages about the girl’s character. The importance of the hood is not only it’s color, though. It’s also found in the role hair covering played in many cultures (and still does). In short, “Little Red Riding Hood” is all about female sexuality and Bryski has used it to discuss the breaking of culturally established sexual norms, taking back one’s power, and a refusal to abide by someone else’s idea of happiness. I very much recommend this story as one to read.

“End of the Sleeping Girls” by Molly Gutman

Two fae sisters, Yasmin and Ingrid, live in the forest with the rest of the woodland creatures. They sleep in fruits, Yasmin in a persimmon and Ingrid, the larger of the two, in a pomegranate. One day, they are invited to tea with a bear and he tells them that someone he knows at the Speculation Bureau has told him that the National Executive had deemed it necessary for everyone’s safety to bring the forest down and force its wild inhabitants to move to the city where they can be watched and brought to order like everyone else. Eventually, this is exactly what comes to pass. But not everyone is content to live under a tent of artificial law.

Much like Bryski, Gutman’s story is rife with symbolism. The one particularly strong message is that of the decimation of nature by modern progress, which is admittedly a little heavy-handed but doesn’t detract too much from the story overall. Of course, with a little rumination and a willingness to look beyond the obvious, readers will see that that same message has many different meanings, some perhaps on the more esoteric side, which is why I find it so fascinating.

Symbolism aside, however, it’s a beautiful story told through the eyes of Ingrid, who is the more serious and wary of the two. Yasmin, the smaller of the pair, is a little wilder, willing to explore and experience life without guilt or shame. They provide a nice contrast to each other throughout the narrative, especially when the actions of the National Executive come to bear at the end.

“A Bad Day in Utopia” by Matthew Baker

A woman, the unnamed protagonist, has had a terrible day. Nothing at all went right and when her friend, Mackenzie, invites her out for a night on the town, she refuses. She chooses instead to visit the Menagerie, a place where men are bred and imprisoned for breeding purposes. In fact, no men exist in the world outside of these prisons, all to save women from being abused by men. Having paid for the privilege of a few hours with her favorite man, Rex, he asks her for something she cannot give.

On its own, Baker’s story is at least well-written and well-edited. There is, unfortunately, a lot to dislike that completely ruined the story for me. I understand the sentiment the protagonist expresses and where it comes from, I do. Many of the things that the she lists as crimes against women, the reason she agrees with a minimum number of men being kept alive worldwide for female pleasure and security, have happened and continue to happen. Unfortunately, this story paints, not only all world societies, but also the male gender as a whole with a broad and very inaccurate paintbrush. It is clear this story is written through the very distorted lens of the modern Western, if not specifically American, social justice movement, even going so far as to mention the “patriarchy,” a term which not only makes me cringe inwardly and outwardly but also renders the story’s entire premise utterly farcical.

The faulty reasoning on which Baker’s world is based is born of a lack of education about and an appreciation for both ancient and modern societies, especially those outside of the Western world. Women in ancient Egypt, for example, had a large number of freedoms. Many ancient cultures and some modern cultures are entirely matriarchal, such as the modern Mosou of China and Tibet. While the Mosou are the last matriarchal society in the region, China was once full of them. The tribes of Southeast Asia are also rife with examples of true gender equality, such as the Palawan of the Philippines, a non-hierarchical group in which men and women have always been equal. These are just a few examples.

Finally, the message this story pushes is a dangerous fallacy. If one is going to tackle the topic of inequality and abuse, then one must accept that men are just as susceptible to becoming victims of abuse as are women, and that women have as much potential to be the abuser as men do to be above such activities. The society presented in the story feels that imprisonment and sexual slavery is just and right, thus the message presented asserts that somehow men deserve to be wiped out, to be nothing more than slaves kept to a manageable population. This does both men and women a huge disservice and is an insult to both.

I found Baker’s story not only to be incredibly distasteful in its attempt to denounce an entire group of people based on their gender but also poorly researched. I can only hope that it was written as satire. Regardless, it is a huge miss for me.