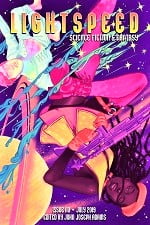 In some distant future, a pair of superhero teens, on a quest to save the universe, find difficulty agreeing on anything. They speak in a manner similar to TV sitcom teenagers, a trait I found mildly annoying.

One of the teens, Cantikle, is the collection of all songs. He has been sent to the past to convince Aeon, the judger, to spare the universe. Although Cantikle’s companion, Aria, has no task, she is the holder of the Sister Ray, a weapon capable of rearranging the universe’s fabric.

Cantikle’s celebrated meeting with Aeon turns out to be an encounter with a mail delivery pod. The humorous situation turns grim when the pod explodes and destroys their ship.

From here, the story inexplicably transitions to a screenplay, set in some version of purgatory. A sudden introduction of Cantikle’s musical lyrics add little to the plot other than confusion. However, also introduced is Nulla, a most intriguing character whose logic-twisting dialog is a joy to read.

Returning from screenplay mode and needing a good villain, Aria’s evil clone, Aspera, enters the plot and creates a variety of ever escalating trials for Aria and Cantikle to conquer, but ultimately the heroes prevail and Cantikle has his final encounter with Eon.

Lauren and Loren, two down and out strangers, sit at opposite ends of a seedy shoreside bar drinking away their morning. Not the typical beginning of a fantasy, but it sets the dark mood of this highly original story. After several hours of steady drinking, the two decide to walk to the beach and visit the enormous, mysterious, recently built, sand castle. Uninspired by the sight, Loren leaves; his function in the story, providing an outlet for Lauren to display her personality, now complete.

Lauren is mesmerized by the castle. She finds wonder in its exquisite detailing, but the joy it brings to others accentuates her own misery. Drawn by alcohol and self-hatred, she enters the structure intent on its destruction.

The story abruptly turns Lilliputian with Lauren as Gulliver, battling thousands of tiny warriors. Being made of sand, the soldiers and their weapons crumble under her hands, but learning from their mistakes they use broken glass to drive her away.

Once outside, she enters a different world. Colors are psychedelic, out of place. Familiar landmarks are missing or no longer where they should be. The reader is left with a conundrum; is Lauren actually experiencing these weird events, is she undergoing an alcohol-induced fantasy, or has she died, and this is her afterlife, similar to interpretations of the movie Gravity?

The story takes a final jog, examining Lauren’s enjoyable albeit bizarre post-castle life. This section adds little to the plot and might have been better off omitted. Even so, the sheer originality of “Sandcastles” makes it more than worth reading.

Since I began writing reviews for Tangent Online, some two -plus years ago, this is the best story I’ve read. Quite a lofty statement considering the plethora of great work out there, but “Miles” has it all: interesting. believable science, an intricately woven story that unfolds like a flower, and emotional touches that make it unforgettable.

The story begins with Noah Stubbs, owner of a commercial lunar vehicle, staring at a white pill in his hand. The sight reminds him of the time he and co-owner Gord were hitting golf balls on the moon. The two friends earn respectable livings, but when Noah finds out his wife has cancer, his share isn’t close to covering her medical costs. With no other options, he agrees to perform some questionable tasks for the shady Arkady, jeopardizing his own career and health in the process.

Premise set, the story takes a psychological left turn; the narrative drifting between images of Noah’s life and his real state, that of an end-stage dementia patient. Here is where Romine’s writing talent shines. The transitions between delusion and reality are so seamless that it’s difficult to discern one from the other, exactly the way Noah’s mind perceives the world. Especially poignant are the times Noah confuses his daughter with his now thirty-year-deceased wife. By the tale’s conclusion, the meaning of the white pill in Noah’s hand becomes sadly clear.

This is truly a memorable story and finishing it without a visceral reaction would be evidence of no heartbeat.

On the surface, this is a story about a Persian travelling showman, retired for many years, and his five magical creature/pets. However, it’s also the canvas on which Ahmad explores much deeper issues.

Each fantastical creature has a unique personality and like Ahura, shows aging in distinctive ways. While describing an inability to control its death-producing dreams, Shadhavar, a carnivorous unicorn, sounds like someone fearful of early onset Alzheimer’s. The other creatures are restless as well, and like a rock band that’s been together too long, decide to leave, if for no other reason than for the change.

Ahura’s character showcases the plot’s overarching theme: How does one determine when a life is complete. As the magical creatures, and Ahura’s two young daughters expose different answers, the story bounces between joy, horror, sadness, and ultimately a peaceful kind of acceptance. Be aware however, like cultural differences, what’s acceptable to someone may be abhorrent to another.