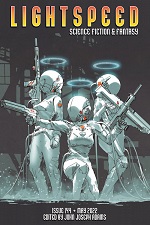 “Nobody Ever Goes Home to Zhenzhu” by Grace Chan

“If We Do Not Fly At Sunset” by Andi C. Buchanan

“The Cheesemaker and the Undying King” by Lina Rather

The first new SF story is “Nobody Ever Goes Home to Zhenzhu” by Grace Chan. This short story is set in a star-faring universe, millennia into our future. The multiplicity of worlds settled by humanity are linked in a loose federation, but most of those individual planets are controlled and run for the benefit of an elite of Oligarchs who first settled or otherwise took control of the planet. This is a highly digitalised universe. Most inhabitants have inbuilt computer enhancements that can readily access planet-wide databases, but this advanced connectivity gives the elite a level of control that current and historic dictators could only dream of possessing. The Oligarchs have the power to alter those records, and that means that historical reality is whatever they say that it is and always was.

The female narrator, Orin, appears to be some form of bounty hunter and is lavishly equipped for that task with advanced physical weaponry and even more advanced neural enhancements. The reader joins the action at the point where her male sidekick has slipped away independently on an expedition to his home planet. To Orin’s experienced eye, the sudden transmission that her sidekick’s long estranged mother is dying and needs to see him urgently has all the characteristics of an elaborate trap.

Our deadly protagonist follows and the trap is sprung in a manner that is not necessarily to the benefit of those who set it.

That alone would have made a neatly compiled space-opera story of a highly competent hero against a powerful, although rather inept, villain, but when she discovers the reason for the villain setting the trap in the first place, that knowledge leads our heroine to review her own role in the system.

The second SF piece is “The Plastic People” by Tobias S. Buckell. This story is set on and around a semi-derelict near-future Earth where the rich and powerful have deserted the garbage-strewn and ruined planet for spacious orbital cities.

The protagonist is a young woman from the uppermost strata of that orbital society. The author paints a clear and believable picture of a young woman who is not a bad person, but rather naïve and over-privileged.

Our protagonist “rescues” a human child from the horrors of the home-planet and transports it to her orbital palace in an impulsive gesture that points up the clear fact that our protagonist is so insulated by her wealth and position that she has never had to personally suffer the consequences of any of her actions.

You may not approve of, or even like the protagonist, but you can certainly believe in her and may have even met her prototype in real life.

“It Came Gently” by Aigner Loren Wilson is a short piece of flash fiction set on a future Earth where all water had vanished from the planet and most of the population had perished or fled to the stars. Now water has returned to the planet as mysteriously as it had departed. Yet it is not the same simple dihydrogen oxide of science, but an altogether most transcendent material.

This piece is better described as speculative fiction rather than SF since it is almost entirely mystical with no hint of science and should be read as such.

The first fantasy piece is “Magical Girl Burnout Bingo” by Lauren Ring. This short-short story is set on a roughly contemporary alternative Earth where female superheroes are so commonplace that they would be a drag on the market if it were not for the fact that evil magical beasts are equally as prevalent. In the finest Marvel comic-like style, these superheroines wade into one on one, no holds barred, fights to the death whilst the rest of the mundane world appears to continue its normal day to day activities as if the magical struggles were somehow not happening.

This whimsical fantasy follows the fortunes of one ex-superheroine through her involuntary retirement (on the grounds of being temporarily dead!) to the point where she must confront the alternatives of continuing to wallow in self-pity at the loss of her magical powers or step up to support a new generation of superhero sisters in the fight of humanity against the forces of chaos.

The second fantasy offering is “If We Do Not Fly At Sunset” by Andi C. Buchanan. This story is set in contemporary New Zealand on an alternative Earth where magical abilities and folk not only exist but are integrated into society. It is written in the rare, and often difficult, second person but this unusual form very much suits this story since the addressee is a fae, an immortal fairy.

Our fae is living an improbably conventional life in a cheap shared flat with an everyday mundane job and very commonplace teenage angst. It is the author’s deliberate intent that the protagonist is able to survive and even prosper in this society and that her greatest problems are those of any youngster finding her way through the complexities of the real world.

This reviewer would dearly wish that that would be so, but the history of mankind does not encourage the thought that a small and physically vulnerable minority with magical powers and immortality would be allowed to integrate into society in the way described without a significant backlash from those wanting such powers to be explored and controlled for the greater good of mundane humanity. The reality of this world could be a far darker story.

The last fantasy story is “The Cheesemaker and the Undying King” by Lina Rather. The action is set in a mainstream fantasy world of swords, sorcery and the existential threat of necromancy.

Our protagonist is the cheesemaker of the title, a plump, no longer young woman from a family of placid, plebeian cheesemakers. The monstrous Undead King has already conquered multiple kingdoms and has now come to the cheesemaker’s fertile and peaceful land. In rapid order he slaughters the army sent against him, murders the queen of the land, enslaves the people and executes the cheesemaker’s true love.

If the struggle of an overweight Cheesemaker against a supernaturally powerful and sword-proof Undead King sounds like an unfair match to you then you would be completely right—the Undead King stands no chance whatsoever!

At the risk of a semi-spoiler, the author cleverly places just enough clues in the text that you may be able to guess how the cheesemaker can succeed where great warriors have failed, but it is also quite possible that you will only see the solution after it is delivered. You will have to read the full story to see just how.