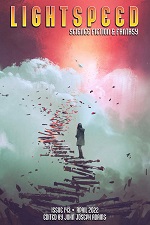 “Advice from the Civil Temporal Defense League” by Sandra McDonald

“A History of Snakes” by Ashok K. Banker

“Everything the Sea Takes, It Returns” by Izzy Wasserstein

“A Sword Has One Purpose” by Phoebe Barton

There are five original stories in Lightspeed’s 143rd issue, plus two previously published stories. The new tales include one flash story, plus a novella split into two novelettes.

“Advice from the Civil Temporal Defense League” by Sandra McDonald

Following an explosion in the secret temporal labs, time is unstable in this SF short. The defense league advises everyone on identifying a time traveler and what to do if you see one, whether they are a bonafide traveler or only suspected.

This story was a tongue-in-cheek look at time travel from the perspective of the normal person who witnesses it.

“A History of Snakes” by Ashok K. Banker

Banker writes a piece of Indian mythology in this fantasy novella. It is the story of how snakes came to be in the world.

Thousands of snakes first came from Kadrush, the wife of a god who granted her wish of a thousand sons, each one stronger than the other. In time other deities grow scared of these snakes and plot against them, causing many different afflictions to befall them. Things that cause their forked tongues, or for some to be venomous and some not.

Eventually, a seer curses a monarch to die at the bite of the king of snakes, and in revenge, that monarch’s son curses that fire must consume all the snakes. Kadrush’s sons try to find a way to avoid this curse, but even the gods can’t break a curse justly given.

The author presented this story in two novelettes a week apart. The combined novella was structured like a mythological story. As such, it was at times interesting and at others pedantic.

“Everything the Sea Takes, It Returns” by Izzy Wasserstein

In this short SF story, Jesse lives by the sea with her lover Lana. The change in climate plus pollution have killed most of the ocean life. But the two girls bravely face an uncertain future together. That is until mercenaries kill Lana and toss her body into the sea. After that, Jesse lives alone as the world goes sour around her.

Then one day, she sees someone gathering samples from the shoreline. They become friends and work together to measure the world as it fights to come back. After all, the sea returns whatever it takes.

The story was a peaceful condemnation of humanity’s inability to comprehend what it was doing to its only home.

“A Sword Has One Purpose” by Phoebe Barton

Rana hires Sid to rescue her brother imprisoned by fascist mercenaries in this short SF tale. The soldiers hold Rana’s brother on a slim spaceship docked at Jupiter’s moon Theta. Sid prides herself on being a badass solver of problems and carries a cutlass to prove the point.

The fascists have taken over the moon Callisto, and Sid fears that Theta will be next. So, against her better judgment, she takes on the case. The cutlass is pleased too, as it loves to drink fascist blood.

The author’s story was an old-fashioned space-pirate story, complete with the cutlass and a fast-moving plot.

In this short fantasy, the Fairy Godmother has an advice column and responds to questions from various people in need. These include a young woman who helps seven short men, another woman forced to clean the fireplace each day, and a prince uncertain if he should kiss a sleeping princess.

The Fairy Godmother’s advice is more inclusive of today’s morals. But how helpful is that?

This story was a light and short look at how today’s society might view the old fairy tales differently.