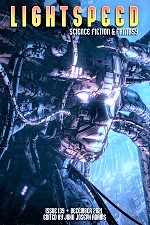 “When Sri Left the Ruined City” by Donyae Coles

“Entanglement, or How I Failed to Knit a Sweater for My Boyfriend” by Carrie Vaughn

“Red is Our Country” by Filip Hajdar Drnovšek Zorko

“Writing You” by Sharang Biswas (Not reviewed – not speculative fiction)

There are six original stories in Lightspeed’s 139th issue, plus two previously published stories. The new tales include two flash stories, one of which wasn’t reviewed.

A daughter asks her father about the world when he was a boy in this flash SF. She can hardly believe all the nonsensical things her father remembers existed in those old times. They are things that don’t fill your belly, which is all that is important now.

A story snippet that predicted a bad future but lacked a biting end.

“When Sri Left the Ruined City” by Donyae Coles

The Unspoken is a prisoner at the Tower’s top in this short fantasy. Their head hangs from chains above the bottomless pit. The rival god Irx placed it there but has since forgotten about the people living around the Tower.

When a distant enemy invades the city, Sri, a servant of the Tower, rushes to the top to ask the Unspoken for help. To save her city and people before she runs out of time, she must unravel the mystery of what the Unspoken is. And in doing so, she discovers time has little meaning to the gods.

This story’s style labored at first and felt as if the plot was too simple for its length.

“Entanglement, or How I Failed to Knit a Sweater for My Boyfriend” by Carrie Vaughn

In this short fantasy, Alex is a fallen angel whose girlfriend decides to knit a sweater. She’s an accomplished knitter but doesn’t know how to accommodate Alex’s wings.

Still, she keeps the project secret, wanting to surprise Alex. After all, it’s her creative skills that Alex finds attractive. But knitting a sweater for an angel awakens some unforeseen powers, and Alex’s girlfriend soon finds herself surrounded by warlike angels.
The subject matter for Vaughn’s fantasy seemed silly at first, but she knitted together such an engaging tale that nothing seemed silly by the end.

“Red is Our Country” by Filip Hajdar Drnovšek Zorko

Four explorers set off to plant a beacon on the dome of the centuries-old habitat of the first Martian colony in this short SF story. Before they get there, an accident with an oxygen valve leaves one of them dead and the rest low on oxygen.

Now there is a race to find a cache of air left from that first attempt at colonization of the red planet. However, when they locate the cache, the explorers realize that someone has recently depleted it. How is that possible?

The author’s story was set in a much-used SF environment, but it came from a new perspective, which gave it a new feel.

Mer visits the dead ancestral planet for the last time in this short SF. Earth has been uninhabitable for a while, and the last people are to be evacuated. Mer’s own home on an asteroid in the belt is gone too, so he’s homeless.

Still, he wants to use up his relocation allowance to visit ten places on Earth before it’s closed for the last time. Each site has significance in Earth’s history since the start of the water wars. Even the bottom of the Mariana Trench, where the air pressure is so much higher.

This story was a catalog of places destroyed by humanity’s stupidity, though the simple descriptions failed to engage the reader fully.