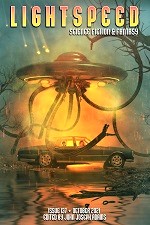 “Memoranda from the End of the World” by Gene Doucette

“Those Who Went” by E. Catherine Tobler

“The Ash-Girl and the Salmon Prince” by P. H. Lee and Rachel Swirsky

“Every Single Brian” by Yang-Yang Wang

There are five original stories in Lightspeed’s 137th issue, plus another two previously published stories. The new tales include a novelette serialized over two weeks.

“Memoranda from the End of the World” by Gene Doucette

An alien parasitic germ is infecting the Earth in this short SF tale. The bug causes Euphoric Fever, where the infected try to bite others to spread the disease.

A series of memoranda reveals the progression of the alien invasion through humanity. These notices come from various interested parties, including the Galactic Corporation, charged with curing the Earth in the only way they believe is possible.

The author’s prose was amusing and steadily revealed the nature of the infection and the cure. It was an engaging read.

“Those Who Went” by E. Catherine Tobler

A spaceship makes a one-way trip in this flash SF as they leave behind a dying Earth. But why did they risk all these generations to stand on a mysterious planet with strange constellations?

This snippet poses the human psyche behind exploration where there was little chance of success.

“The Ash-Girl and the Salmon Prince” by P. H. Lee and Rachel Swirsky

In this fantasy novelette, a poor fisherman and his wife dote on their two eldest daughters and despise the youngest, calling her Ash-Girl and forcing her to sleep in the fireplace. When the father rescues the magical Salmon King, the fish bestows riches on the family in exchange for the youngest daughter, taking her as his undersea queen.

At first, the queen, now renamed Eleanor, lived happily in the undersea palace with her husband. But after some time, she asked to visit her parents to show how well she was. The Salmon King reluctantly agreed but warned her not to stay more than three nights. Eleanor is treated the same back home as before, and after three days, she forgets that she was once happy in the undersea king’s palace.
Eleanor’s human family grows discontented in time, and the father petitions the Salmon King for a castle in exchange for Eleanor’s return. Though reluctant to give her family anything, Eleanor beseeches him to help them for the sake of their love together. And Eleanor’s family is given a castle to live out their pretentious lives.

But after several years of bliss, Eleanor once again misses her mother. Is it possible her mother has changed her ways?

The magazine published this story in two parts inside the October issue. The story had the pace and style of a fable, though the second part felt repetitive and dragged in some places.

After killing ten dragons, two hunters trap another in this short fantasy. Marisol seeks the dragon that killed her sister and bit off her arm. Tonia is her friend who made her metal arm.

For the eleventh time, Marisol is convinced that this is the right dragon. And so, they set up their traps and prepare for what could be their final revenge.

The author’s story was barely longer than flash fiction and felt rushed.

“Every Single Brian” by Yang-Yang Wang

A fanatical group destroys Dr. Bellman’s research facilities in this short SF and scatter the clones of Brian, her husband. Now each like-Brian must be found and tested by Dr. Bellman in the hope of discovering the original.

As she checks each over several years, she discovers how painful the task is. She feels responsible for each one, and soon it grows harder to deal with meeting clones of her lover and rejecting each one. What if she doesn’t find him? Or worse, rejects the original by mistake?

This story was an interesting exploration of the human side of cloning, and the author did well to prevent the repetitive nature of the story from dominating the narrative.