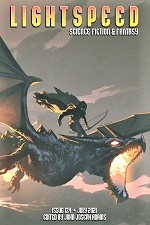 “Miss the Zen but Miss You More” by Everdeen Mason

“How to Become an Ancestor” by Nicole D. Sconiers

“A Smell of Jet Fuel” by Andrew Dana Hudson

“No Lies Detected” by Russell Nichols

“Miss the Zen but Miss You More” by Everdeen Mason is a SF short story in which a young woman spends multiple days alone in an orbiting zero-gravity sensory deprivation pod. While this may sound like a nightmare, the protagonist has willingly undertaken this as the ultimate meditation retreat to find her better self. But stuck in her own thoughts, with only her AI to talk to, the time passes with an increasing degree of anxiety and doubt. The sense of isolation is quite nicely handled, and the introspection comes across as mostly convincing. I couldn’t help thinking it was a highly unlikely scenario, however, which reduced the story’s impact.

“How to Become an Ancestor” by Nicole D. Sconiers is a piece of flash fiction, which explores what is required in the nature of one’s death to become an ‘ancestor’. Told from the perspective of a murdered woman who has been rendered in graffiti on a wall for posterity, the tale is rather light and insubstantial. Moreover, as the woman appears to have been dead for only a matter of months, ‘ancestor’ doesn’t seem to be the right word here.

“Innocent Bird” by Rachel Swirsky is a fantasy short story that features a teenage Japanese girl with several causes for worry and anxiety; her mother has left her and her father, she’s falling in love with another girl from high school, and like her absent mother, she’s growing small, feathered wings on her back. While the girl’s concerns and outlook come across as lacking in maturity, this is a thoughtful—and probably accurate—portrayal of high school girls challenged by change and uncertainty. Quite light in touch and tone, I imagine the story would be best enjoyed by young adult readers who are looking for fantasy romance.

“A Smell of Jet Fuel” by Andrew Dana Hudson is a powerful SF short story. The future invention of a time travel machine enables tourists to visit the 107th floor of the World Trade Centre South Tower on the morning of 9/11. There to witness the second plane hit their tower, the tourists have 30 minutes to experience the terrorist disaster before they have to leave. But being an SF story, the plot unfolds in an unexpected and interesting direction. Intriguing and rather compelling, this is a solid time-travel story and is recommended, with only one caveat: those with personal links to 9/11 might find the story rather dark and challenging.

“No Lies Detected” by Russell Nichols is a piece of flash fiction based on the Pinocchio fable. A robot is constructed and given AI programming that can spot a lie. Dealing with issues of control and the paradoxes that can underly truth and lies, it’s quite satisfying for flash fiction.

“Amber Dark and Sickly Sweet” by Lulu Kadhim is an imaginative, but grim and pessimistic, fantasy short story. Young women are held as ‘farms’ for honeybees and are treated as both walking hives and as sex slaves. As the background and reason for the hive women is not given, the story can only really be interpreted as a moral allegory for our modern world and gender inequality. From this perspective, the message regarding the objectification of women, though laudable and well-meant, seemed rather bluntly made. The story deserves credit for the imaginative idea, however.