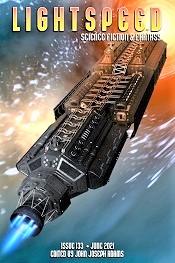 “A Tableau of Things That Are” by Adam-Troy Castro

“When You Die on the Radio” by Adam R. Shannon

“Do Nothing” by Endria Isa Richardson

“A Tableau of Things That Are” by Adam-Troy Castro is an effective and enjoyable fantasy novelette. A man who killed someone in a drunken brawl was sentenced to petrification, to stand as a stone statue in a park for ten years. As a statue he sees and hears but feels no anguish at the slow passing of time, as he has lost all sensibility through his transformation. When his sentence is over he is free to leave the park, but he remains a stone man, impervious to feeling. In this state, he takes a long walk back to the house where he lived with his wife, and once there he stoically confronts his past. The idea of a stone man, who weathers and senses time passing, but lacks the emotionality and sensitivity of flesh and blood humanity is an intriguing notion, full of metaphor. This is a study of time, and how we imprint an artificial appreciation of time through how we live. Novel and quietly affecting, this story is full of memorable imagery and is recommended reading.

In “Different People,”by Timothy Mudie, a number of refugees from an alternate universe ‘Earth’ come through to our world to escape their dying universe. One of these refugees, a physicist named Rachel, finds the man who was her husband on her Earth, a man who had never previously met her equivalent on our Earth. The story is quite interesting in playing out the dynamics of how the different characters from each dimension would interact, and how much they would know each other. The stakes are also very high, and it’s quite successful at building tension. However, the greatest emotional response the reader is likely to have is intense frustration with the protagonist, and indeed the organisations on our Earth, that they can be quite so stupid as to allow the ultimate conclusion. The outcome unfortunately beggars belief. In addition, while the use of the second-person point of view enables an interesting start to the narrative, it no longer really works well by the end of the tale.

“When You Die on the Radio” by Adam R. Shannon reads like a fantasy tale with science elements, or SF with a touch of the weird. A firefighter makes a mayday call to his colleagues just before he dies in a house blaze. In this tale, mayday calls persevere and repeat over and over on the same frequency the caller used, making it necessary for firefighters to change their emergency radio frequency after each fatality. After one such incident, the fire station lieutenant receives a visit from a mysterious visitor who says he has a device that will save all future callers who make mayday calls. While it is fine for a story to straddle fantasy and SF (i.e., ‘science fantasy’), in this case the use of tropes from both genres confuses the outcome, rather than illuminates it; I’m not sure whether the story works, structurally, and it didn’t make complete sense to me.

“Do Nothing” by Endria Isa Richardson is quite a challenging short story, as it seems to purposely avoid clarity. Aliens are coming to Earth, which will be destroyed in 6 months (in a manner not described) and humans will have the choice to die or become disembodied minds in space. The aliens apparently don’t have bodies (except there are aliens with bodies being held in Alcatraz) and they don’t seem to appreciate or communicate with humankind. While there is much that is murky in the plot and background to the story, some occurrences are described in florid detail. When the protagonist takes a photo, we are informed: The images appeared centered, boxed in by the rectangle of her viewfinder. They were light redirected from the lens by a prism; they were not solid through; they were light scattered onto liquid crystal. Indeed. This was ultimately a miss for me, with the parallels between humanity’s fate and our history of incarceration insufficient to raise it above the average as an SF story.