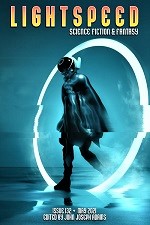 “The Palace in the Moonlight” by Howard Andrew Jones

“There Are No Hot Topics on Whukai” by Andrea Kriz

“Bones in It” by Kristina Ten

Lightspeed #132 offers two original SF short stories and two original fantasy tales. The standard of these stories was pleasingly high, and readers are encouraged to take a look at Lightspeed this month.

“Hypnopompic Circumstance” by Gene Doucette is an engaging and entertaining SF short story. An unattached, failing, real estate agent called Thomas is visited in his bedroom on a regular basis by a tall, bony alien. Usually appearing when Thomas is waking up (similar to a hypnopompic hallucination), the alien nevertheless seems to be real, asks hard questions about Thomas’ purpose in life and offers sage advice. This well-written story is not only amusing and fun but also has something to say about the lives and occupations many fall into, as opposed to lives they consciously choose. Recommended.

The fantasy short story “The Palace in the Moonlight” by Howard Andrew Jones, is an enchanting adventure, well-written in a classical, rather antiquated style that reads like a cross between Haggard and Howard. Set in 801 AD, two ambassadors of the Caliph of Baghdad, Asim and Dabir, travel to the legendary palace of the Queen of Sheba to offer her the Caliph’s friendship. After a long and difficult journey, the pair arrive at the wondrous palace to find it’s enchanted, and their diplomatic mission takes on a dangerous turn. With a backdrop of true history (the Caliph at that time was indeed Harun al-Rashid), the story encourages acceptance of the fantastic elements in the tale, and overall, the story is quite satisfying. The only negative to speak of is that the conclusion uses a well-worn fantasy trope as opposed to a novel idea to resolve the adventure. Nonetheless, this tale is likely to be enjoyed by most readers. Those who especially enjoy it may be interested to know that the characters Asim and Dabir previously featured in Jones’ two Chronicle of Sword and Sand novels.

“There Are No Hot Topics on Whukai” by Andrea Kriz is quite an interesting story, integrating ideas around the use of social media and virtual reality in an SF setting. Colonists on the drab world of Whukai (presumably in the far future) spend a good deal of their time engaged in a virtual reality game, earning in-game currency which they can sell for real money to Terrans. One young Whukain woman is engaged by a Terran author to accompany her as an avatar to virtual parties as her ‘friend’, and also to add verisimilitude to chapters of the author’s work that are set on Whukai. The story develops tension and drama when the Whukain girl realises the author has less than ethical goals. While the SF themes of virtual reality, avatar representations and computer-based socialising are not novel in themselves, the story nevertheless has quite a fresh feel to it. Two niggles with the tale exist, however; firstly, the use of terms that are currently vogue in the real world, such as “hashtag” seem rather out of place; and secondly, the past barbaric treatment of the Whukai colonists by Terrans, referred to in the story and critical to the plot, is not very believable.

“Bones in It” by Kristina Ten is a fantasy horror story of high quality. A long-standing Russian spa business in Chicago has for many years been home to a ‘vedma’—a witch with two mouths, many breasts, and a thirst for meat. She lives behind the boiler of steam room 3, having made a deal with the original owners to their mutual benefit. But when the spa is taken over by new owners it becomes vegan; a problem for the vedma who requires meat with ‘bones in it’. The author switches between scenes featuring the vedma and a backstory about a creative writing professor and weaves these threads together at the end. Ten not only provides tension and impressive imagery, but also renders rounded characters who emotionally draw the reader in, and there are scenes here that pack a genuine punch. The tale is also littered with observant commentary of the modern world; for example, the new owners don’t notice missing inventory as they are too busy designing an appointment booking app. These subtle observations add further depth to the story and overall, it is a highly recommended read.