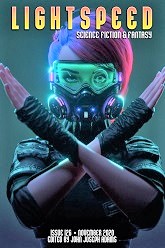 “The Lachrymist” by Kat Howard

“Magnificent Maurice, or the Flowers of Immortality” by Rati Mehrotra

This month’s issue offers the usual pair of original tales of fantasy, but instead of the typical two new works of science fiction, it features only one. This is because the single SF story is longer than most appearing in the magazine.

The punning title of “Schrödinger’s Catastrophe” by Gene Doucette provides a hint of the story’s tongue-in-cheek tone. A starship is trapped in a region of space where the laws of physics break down. The protagonist arrives on a shuttle from another vessel, in an attempt to rescue the stranded ship. This leads her into a madcap adventure where anything can happen, and nothing makes sense.

It is surely no coincidence that the main character’s first name is Alice, as her journey into the surreal world of the starship resembles the fantasies of Lewis Carroll. The author adds metafiction to the plot, in the form of a computer that sometimes narrates events as they occur. In keeping with the topsy-turvy theme, the story ends just about the same way it begins.

Many readers will find the tale’s lighthearted mood appealing, as well as the endless supply of strange happenings. Others may dismiss it as an extended shaggy dog story. Although the story moves at a rapid pace and is very readable, it seems overly long for its whimsical, nonlinear plot.

The title character of “The Lachrymist” by Kat Howard is a being whose function is to shed tears for everything that dies, whether it be a person, a word, or a world. She keeps the tears in bottles that preserve the memory of whatever is lost. A poet who wishes to be forgotten causes her to consider her own demise.

This very short work is more of a prose poem than a fully developed story. The author creates an effectively dream-like mood, but one might wish for more than a brief glance at the intriguing main character.

“Magnificent Maurice, or the Flowers of Immortality” by Rati Mehrotra takes place within a universe-spanning tree inhabited by a witch and a cat. The cat has used all but one of its nine lives, and a group of kittens wait for their turn to take its place. A woman arrives seeking a flower from the tree, which will grant immortality to her dying lover. At first, the cat opposes her, but they must soon work together to defend the tree from invading monsters.

The author combines cosmic vastness with small, domestic details. Some sections depict the destruction of entire worlds, others the ordinary activities of cats. An attack by zombies at the climax seems out of place with the rest of the story. Giving the woman the name Uhura is also problematic. This will inevitably make the reader think of Star Trek, which is an irrelevant allusion.