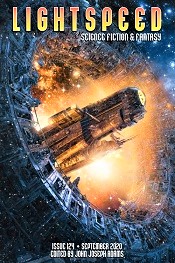 “The Author’s Wife vs. the Giant Robot” by Adam-Troy Castro

“Destinations of Waiting” by Alexander Weinstein (not speculative fiction)

“Note to Self” by Sunny Maraine

There are four original stories in Lightspeed’s 124th issue, one of which is a novelette, and Tangent did not review one short story as it wasn’t speculative.

“The Author’s Wife vs. the Giant Robot” by Adam-Troy Castro

Drifting through life, Eddie remembers the day the Giant Robot killed his father. He’d been five at the time, and it left him with images of the robot’s tentacle squishing his beloved father’s head.

The Giant Robot had stood in the city for a century and a half, killing just one person every day. Somehow the robot compensated the city through free power and a robust tourist industry. But the fact remained, it had murdered Eddie’s father over twenty-five years ago. There was no chance for revenge or understanding. So, Eddie learns to come to terms with the cruel reality of a monster that only kills once a day. And in the big scheme of things, that wasn’t so many, was it?

Told through a whimsical style, the story gave no rationale for the robot’s existence or where it came from. The plot had no conclusions or any purpose beyond showing that it’s easy to rationalize death to others as unimportant.

“Note to Self” by Sunny Maraine

Quantum mirrors go from theory to a practical thing in this SF short. Initially the concept, the idea of two graduate students, begins to take shape. The mirror clones molecules, sometimes accurately, sometimes not.

As the work progresses, more centers of teaching become interested and then governments. Researchers clone living things with a few sickening results. Eventually, strange intrusions began to appear. At first, thought to be the product of drug-induced dreams and hysteria, the intrusions became more damaging. The intrusions raze whole areas, and people kill clones of themselves. No one is safe, least of all the two graduate students who started it all.

This was a strange story that reads more like a journalistic account than a narrative. Despite little character development or plot flow, the story was an interesting read, though a tad longer than its content warranted.

In this short fantasy, the daughter of a human mother and eight-tentacled sea monster father is torn between her two pasts. She is torn between being mean or charitable. And to make matters worse, she has a small sea monster wrapped around her heart and lungs.

Her mother sends her to therapy with an erstwhile witch. But it has little effect on the sea monster parasite inside her. So, she decides to go against her mother’s advice and try another route. She sets off in search of her father, who continues to ravage seaside cities.

“Entanglement” was a pleasantly paced story, but its ending came without a conclusion.