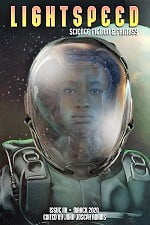 “Tend to Me” by Kristina Ten

“Many Happy Returns” by Adam-Troy Castro

“Love and Marriage in the Hexasun Lands” by Tahmeed Shafiq

There are four original stories in the 118th issue of Lightspeed, one of which is a novelette.

In this SF short Dr. Jenkins has left her daughter and her Carolina roots behind to go to Titan. She is going to verify the giant footsteps that the Cassini-Huygens probe pictured.

Throughout the trip she reflects on her history growing up in the harsh realities of being a black woman in South Carolina and the decisions she made to pull herself above it all. As Titan approaches all those choices come into clearer focus.

The story dragged a little in places, but an insightful read, nonetheless.

“Tend to Me” by Kristina Ten

Nora attaches herself too much to her boyfriends in this short fantasy. She readily adapts to each one’s hobbies, eschewing her own needs and desires. And this weakness creates greater problems when she meets an amateur acupuncturist.

She knows the words acupuncture and amateur are dangerous in any combination. Yet, Nora still lets him practice on her. And after a session with the needles, she begins to metamorphose into a giant saguaro cactus. Despite his best intentions, she continues to grow, becoming too tall for their apartment. They will need a different solution.

This whimsical story passed like a warm summer breeze. A nice diversion during trying times.

“Many Happy Returns” by Adam-Troy Castro

In Castro’s SF short, Gorman is dodging his familial responsibilities for one year. The problem for his rich family, and the robot sent to mark the end of that year, is that there is more than one definition of a year.

Gorman plans to enjoy himself forever and to hell with the robot tracking him, or the family’s business.

The author told this story with humorous prose. But the funny style could not hide the fact that the plot was repetitive.

“Love and Marriage in the Hexasun Lands” by Tahmeed Shafiq

A young king marries Schyan, the goddess of love, in this fantasy novelette. Adhamrya uses his alliance with Schyan to subjugate his people and brutally put down any rebellions. But then he sees the goddess for the unfeeling monster she is, and he turns away from her love.

In time, he meets another woman, Varabhata, a queen in her own right. They keep their affair secret, not wanting to offend Schyan. But such deception of a goddess isn’t possible, and to compound their problems, Varabhata is now with child.

The gods come for revenge on Adhamrya and his kingdom, though Schyan still has feelings for him.

An interesting story told in an engaging style.