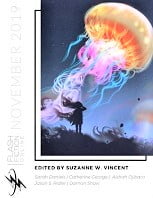 “Meet Me In Okhotsk” by Sarah Daniels

“How to Win a Pulitzer” by Aishah Ojibara (nongenre, not reviewed)
“Widdershins Mine” by Damon Shaw
“Ephemera” by Catherine George

Three allegorical fantasies appear in the latest issue of this magazine of very short stories.

“Meet Me In Okhotsk” by Sarah Daniels takes place in what seems to be the familiar modern world, but with a major difference. The planet is flat instead of round, with the ocean falling off the edge into infinity. Thrill seekers dive off the edge. Half of these reappear safely in another place. What happens to the rest is unknown. The main character is a scientist studying the ocean near the edge. After contemplating the endless waterfall, she makes a decision that changes her life.

The concept is a poetic one, allowing for vivid imagery. The theme of daring to take risks is a worthy one, but there is little suspense, since it is obvious from the start what the protagonist will do.

In “Widdershins Mine” by Damon Shaw, the narrator has the magical ability to own anything after walking around it anticlockwise three times. This power starts on a small scale, with a cow when the narrator is a child. Later the narrator takes possession of Scotland, and begins a triple journey around the world in order to own the entire planet. Multiple encounters with a man who seems to be doing the same thing in reverse lead to an enigmatic conclusion.

The premise is interesting, if difficult to accept, because of the immense power it gives the narrator. The ending is intriguing but overly ambiguous.

In “Ephemera” by Catherine George, material objects, under their own power, follow a man after he leaves his wife. The divorced woman watches, one by one, things that remind her of their relationship disappear. She makes a final gesture to begin a new life.

The story has the feeling of magic realism, as other women report similar experiences after their divorces, without finding it supernatural. This quiet fable about accepting loss makes its point adequately, if simply.