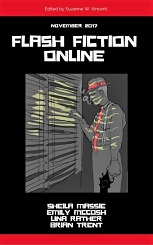 This issue of Flash Fiction Online brings us three stories loosely connected by the theme of being grateful for small things in difficult circumstances. As usual there is also a fourth, reprinted, story: “Last Long Night” by Lina Rather, which is not reviewed here.

At first glance, “Crater Meet” by Brian Trent appears to be a straightforward tale of World War I soldiers from opposite sides meeting secretly and enjoying each other’s company. It’s a familiar message: the enemy is not so different from us, after all. An apt story given that it’s Remembrance Sunday this weekend, and beautifully crafted, but not science fiction or fantasy. Or is it? This piece, which Flash Fiction Online has listed as mainstream, generated some discussion here at Tangent Online this month. Is it truly straightforward, mainstream, fiction or does it have subtle hints of something else going on, namely, time travel? Having read it a few times I confess I’m still not entirely sure. Either way this is a lovely piece, so read it for yourself and decide. (And, dear author, if you see this review do look us up on Facebook or Twitter and put us out of our misery!)

‘The Stars and the Rain” by Emily McCosh is easier to categorize: in the second sentence we learn we’re on another planet and thus on familiar ground (at least in the world of science fiction!). The story is told from the point of view of a woman who is meeting her brother after a long separation. She’s a photographer, he has some kind of illness which affects his muscles and which, it’s implied, will cause him to die young. Their story unfolds as our protagonist reminisces over the photographs she and her brother have exchanged over the years, and the messages they’ve attached to them. Nothing can break the bond between these siblings: not illness, nor interstellar travel, nor even war. This is a sweet story which makes me wonder why we don’t see more pieces exploring the theme of familial affection. Nicely done.

“Baker” by Sheila Massie describes twenty-four hours in the life of Rafael, the titular baker. He lives in a world where people have demons permanently attached to them, living off them like parasites and eventually killing their hosts. It’s not completely clear if these demons are visible to anyone other than Rafael, who has the ability to knead magic into his wares. I struggled with this story. Everyone we meet has demons, except for a priest (and Rafael, we assume—although that’s not explicit). Even a baby is described as having three demons on its back. Is it meant to be some sort of religious allegory? Is the message that everyone (even the baby) is sinful, while Rafael is some sort of Jesus-character, handing out compassion and hope with his bread? I don’t know if this is what the author intended, but either way I can’t say the idea of a magical figure ameliorating the problems caused by an epidemic of sinfulness does it for me, especially since we’re told it’s “never enough.” Massie has created an intriguing world, but personally I’d have preferred to read the story where one of the other characters manages to destroy their own demons without the help of magic bread and a priest.

Kat Day makes children handle fire and dangerous chemicals for a living (it’s okay, she’s a chemistry teacher). When not doing that, she spends her time writing and trying to wrangle her own two children into line (without fire or dangerous chemicals, because that would be frowned upon). You can follow her on Twitter @chronicleflask.