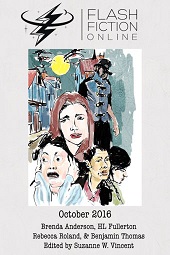 “The Monster on Her Cheek” by Rebecca Roland

There are a lot of things a mother fears for her children. Being born with an inoperable, conjoined monster on his or her cheek is one of them. In “The Monster on Her Cheek” by Rebecca Roland, Wendy must go through just that as she struggles to accept her daughter’s deformity, and wrestles with what the outside world might think of them both.

“Monster on Her Cheek” carries a good balance of social commentary and the bond between mother and child, making it a very relatable story. At times the prose feels a bit too on the nose, giving readers the narrative plainly and leaving little left to ponder.

Alan has learned the do’s and don’ts of dealing with ghosts in “Three Rules for Befriending Ghosts” by Benjamin Thomas. And being haunted by the ghost of a little girl isn’t so bad, if you stay on her good side. Sometimes it’s even better than spending time with a significant other.

The length of “Three Rules for Befriending Ghosts” is its biggest weakness. There are two almost entirely separate stories here, and neither of them is adequately explored. The story feels like the introduction to a much larger work, and without more depth to Alan, Mandy, and Jason, the ending is a long way from satisfying.

In a situation beyond comprehension, Janssen has managed to get his group home pregnant in “Offspring” by Brenda Anderson. He wasn’t trying to. He didn’t even know it was possible, but after James died the strength of his emotions did the job without him noticing. Of course it helped that the house itself was under the influence of an alien. There are some things a man just can’t predict. Like what his son might grow up to be, and to do.

Despite the unimaginable premise, “Offspring” manages to tick off all the boxes of a complete, emotionally fulfilling story from beginning to end. Its one difficulty is in the pacing. The middle is disproportionately rushed compared to the beginning especially, giving readers a jarring, speed-of-light express ticket to the end that leaves the stomach in a bit of a lurch.