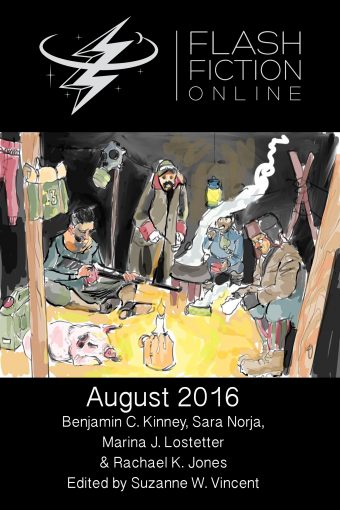 “You Are Not a Metaphor” by Marina J. Lostetter
“Creation” by Sara Norja

This month’s Flash Fiction Online brings us four stories loosely based on the theme of hope. One is a reprint (“Mamihlapinatapei,” an odd little dinosaur story by Rachael K. Jones) which is not reviewed here, while the other three are a mixture of science fiction and fantasy.

“The Time Cookie Wars,” by Benjamin C. Kinney, is a time-travel caper in which our protagonist, Sanna, decides to pop back in time when she wants a snack. This isn’t the first time-travel story this year to feature multiple selves (for example, “One’s Company” by Davian Aw in the March issue of Diabolical Plots) and, personally, I felt this lacked a certain something. Sanna’s actions seem extreme – as a reader I was left thinking, ‘surely there was another way…?’ – and the tone of the final paragraph felt at odds with the comedic tone of the rest of the story. But I have to admit, the glorious phrase “a hundred rapacious philatelists” almost won me over all on its own.

In “You Are Not a Metaphor,” by Marina J. Lostetter, we meet a narrator who’s struggling to cope with a partner suffering from ‘Escapist’s Disease.’ It’s a neat riff on the idea that modern-day diseases have their fantasy analogues and, perhaps, vice versa. The story, which is written in second-person, wryly breaks the fourth wall when our narrator says: “You never did care for second-person point-of-view.” It touches on the fact that there’s been a breakdown of physics, and I found myself wanting to know more about this apparently apocalyptic world – I hope Lostetter extends this idea at some point.

“Creation,” by Sara Norja, is a fantasy tale set in the land of Faerie. We meet Hands-of-Clay, who has apparently been abducted from the mortal world to work for the Queen of Faerie. Norja makes excellent use of imagery to conjure up feeling of desolation and desperation and, for me, this is the story that really nails the ‘hope’ theme in this month’s issue. I was left with a real sense that our protagonist was about to embark on a new journey. A great story to end on.