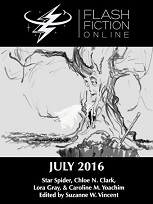 “Green on the Inside” by Star Spider
“So This” by Chloe N. Clark
“Nuclear Daughter” by Lora Gray

This month’s Flash Fiction Online brings us four stories on the theme of maternal instinct. One is a reprint (“Birthday Child” by Caroline M. Yoachim) which is not reviewed here. Of the other three, “Green on the Inside” and “So This” are labeled as literary fiction, but both contain elements of fantasy. The final tale, “Nuclear Daughter,” is a piece of straight-up science fiction.

“Green on the Inside,” by Star Spider, is an odd little tale written in the unusual combination of third-person, present-tense. We meet Mirabelle, a woman who is digging in her garden as the story opens. This seems to be a mundane gardening task, but as the story develops we learn there’s far more to her actions. As in all the very best flash fiction, Star Spider manages to pack a lot into few words, including some very effective dialogue. The story twists neatly, and at the end we are pleasingly almost back where we started, but with a deeper understanding of Mirabelle’s actions and a lingering sense of sadness. I enjoyed this evocative story, and whilst the ideas within it have been addressed many times in other tales, it’s cleverly written and well worth a read.

“So This” by Chloe N. Clark tells of a couple visiting an animal shelter to adopt a dog. They choose an animal with “eyes the color of rubies” and name him Catnip. The story then goes on to describe the developing relationship between our protagonist and the dog. This is another present-tense story but this time it’s first-person, and the main character’s voice often runs on for long sentences with little punctuation. In my head, it read like a child breathlessly relating their day’s events to a parent, which jarred with story elements strongly implying an educated, adult woman. It was so odd that I wondered if the author had intended to portray an adult who was in some way neuroatypical, autistic perhaps. If so, I can’t help feeling it was an opportunity missed not to make that a little more obvious. Overall the whole thing is dream-like and the ending, such as it is, wasn’t particularly satisfying. I’m sure some people will appreciate the strangeness, but it didn’t really work for me.

In “Nuclear Daughter,” by Lora Gray, we find ourselves in a post-apocalyptic world following a nuclear explosion. Our unnamed protagonist is, for want of a better description, pregnant. The story describes the last few days leading up to the moment when her children make their arrival. Lora Gray makes excellent use of language to conjure up images and sensations; I particularly liked the description as our protagonist shuts her eyes towards the end. But I’m afraid I didn’t entirely love this story. Partly because the idea of a post-nuclear world feels rather dated as a theme, and partly because the main character quite literally lies down and accepts her fate. Admittedly in the story as told she had little choice, but personally I found it difficult to empathize with her passiveness.