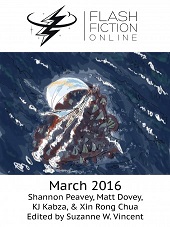 In the first piece by former dogfighter turned writer Dovey, an extraterrestrial race faces imminent extinction by an empirical governing power from their galactic fleet. Perspectives shift from the captain of the armada to a patriarch, a spiritual leader, and a rebellious freedom fighter as the planet is slowly consumed by destruction. Poetically structured and steadily paced, Dovey captures the emotions and reflections of four primary archetypes as the true apocalypse descends upon them.

This quick tale tells of an unknown marine parasite whose prey slowly turn to stone. The unnamed main subject narrates her acceptance and even welcoming of the transformation while her human body disappears on the shore of an unknown beach. A co-infectee outwardly voices his displeasure and mental resistance to the imminent changes as the remaining humans do their best to ease the transition while sending Red Cross volunteers to check in and study the subjects. Quick to read and tough to miss, author Peavey uses her knowledge of marine biology to consolidate one case of what could easily be part of a larger epidemic.

A brief, yet deep look at the mindset of Xiaotong, an eager girl who waltzes through a chess tournament where she is the underdog of the Open category versus the top player in the girls’ division. Chua gives Xiaotong a confident but not arrogant demeanor as she factually surveys the territory and details the small inner workings and emotions of competitive chess players. While more of a psychological second-person narrative than a run of the mill sf/fantasy story, a dream can be dreamt and maybe even realized.

“All Souls Proceed” by KJ Kabza

The last story in this month’s issue visits the illusions of a person experiencing for the first time a festival known as the All Souls Procession, an evening march reminiscent of the Mexican Dio de Los Muertos (with tamarind soda to boot). The main character is never identified as male or female, but talks about a married female friend who introduces our protagonist to their culture of honoring the dead. Along the way, bicycles are scattered and left as memories of those who once rode them, the last remnants of their departed souls. A final realization is met when our principal comes to understand some hard-hitting truths about the ones we lose. Told as a present tense narration of a character whose eyes open wider with every paragraph, in the hopes that the reader’s may as well.