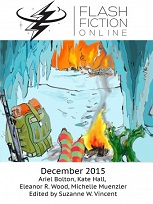 “To the Havens” by Ariel Bolton

This is my first literary sprint with Flash Fiction Online (FFO). On investigation of the purpose of FFO, the editorial staff states they select “some of the best darn flash fiction (500 to 1000 words) there is.” Founded by Jake Freivald in 2007, Flash Fiction Online has been published by Anna Yeatts since September 2013. With a flash of high expectations, I jumped right in.

The opening story, “To the Havens” by Ariel Bolton, is a fitting tale for the Christmas season but the subtle digs on Santa and the North Pole (“The shifts in those factories are twenty hours long, and the food will be running short this time of year.”) either indicate the author has relatives in the Grinch family or else she stopped hearing the Reindeer bells a long time ago. The story begins in Tuktoyaktu, Northern Territories, Canada when a policeman, Beaupre’, finds the lifeless remains of what we later discover to be an elf. His supervisor, George Aklaq, informs him that elves aren’t recognized as either human or migratory wildlife and normal disposal procedure would be the nearest dumpster and filing an Animal Control report. Upon Beaupre’s expression of displeasure, he proposes a burial at sea instead. The author kept herself off the naughty list and probably won’t get a lump of coal in her stocking based on the ending. A brief flash of a white Christmas without a single bah, humbug!

The Fibonacci sequence is the series of numbers: 0, 1, 1, 2, 3, 5, 8… The next number is found by adding up the two numbers before it. The 2 is found by adding the two numbers before it (1+1). The Fibonacci spiral is an approximation of the golden spiral created by drawing circular arcs connecting the opposite corners of connecting squares sized in the Fibonacci sequence. In “Fibonacci” by Eleanor R. Wood, a young female marine biologist is studying ammonites, an extinct group of marine mollusk animals in the subclass Ammonoidea of the class Cephalopoda. She is attempting to revive the species through a Nautilus hybrid after being drawn to the ammonite as a child due to their Fibonacci-like spiraled shell. What follows are a seemingly unrelated series of events which all seem to follow in sequence. I give kudos for threading a mathematical formulae into an engaging story.

“The Snow Globe” by Kate Hall is a slightly disturbing tale of a young girl of “about 10” and her sister, Clara, who in Groundhog Day style, daily awake in their house, in their room, awake on Christmas morning, she opening her present, a teddy bear and Clara, her nutcracker. Each day Clara reads her one book which told her that space didn’t end—but for them, it does because “someone put a lid over us.” Clara falls further and further into despair, her desire to escape growing until her plan finally succeeds. If this didn’t so clearly imitate the 1989 animated short Knick Knack by Pixar or the countless “trapped in a snow globe” grade school writing assignments on Pinterest, it might have been more intriguing. Still, it did present another dark side to the winter season.

Flash Fiction Online was a very quick read. I look forward to reading it again in the near future. “A whole school of perfect spirals.”

Eric Kimminau is a BBS geek turned IT professional seeking those of like mind and character with whom I may share in wit and wisdom.