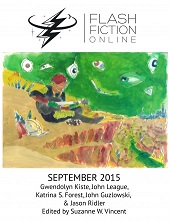 “Pidgin” by Katherine S. Forest
“Ships and Stars and Childhood Things” by Gwendolyn Kiste
“The Wedding Gig” by John League

As with most ultra-short fiction, we don’t get a lot of backstory in “Pidgin” by Katherine S. Forest. We are thrown into a room where the narrator is trying to communicate with a human who has returned to Earth from a distant colony. This returnee does not speak, and the narrator is trying to teach him sign language. She then discovers he does have a way to communicate. While his method of communication is an interesting concept, the story really never goes anywhere.

“Ships and Stars and Childhood Things” by Gwendolyn Kiste is a somewhat wistful story of a girl, Brandilene, who lives on a space station that is frequented by those who wish to buy and sell items. People come every summer for the selling season, and the story begins with Brandilene seeing a handsome ship pilot, who smiles and winks at her when he arrives. The years pass, and Brandilene ages, but the pilot doesn’t because he “sleeps” during transit (no specifics are given as to the exact technology.) The inevitable relationship between Brandilene and the pilot develops, but Brandilene has her own goals in life. The ending lacked the punch I think the author desired, because Brandilene’s feelings about Earth are only touched upon earlier in the story.

“The Wedding Gig” by John League takes place after a plague, called the Fever, has occurred. The Fever killed many, and those who survived are marked by visible dark green and black scars on their skin. The story is narrated by a female trumpet player, who is a survivor of the Fever. Her band is playing at a wedding, where the bride is also a Fever survivor. They play some songs, the narrator muses about the youth and inexperience of the new sax player, and the story ends. There are references to the famous saxophone player, Sonny Rollins, and his music, so perhaps jazz aficionados would get something out of this story. Unfortunately, I didn’t.