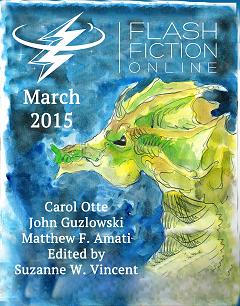 “Small Wishes” by Carol Otte
“The Last Man on Earth — a Mini Novel” by John Guzlowski
“The Cratch, Thy Keeper” by Matthew F. Amati

Flash fiction is difficult. It takes a lot of work to tell an actual story in under 1000 words, instead of a vignette that’s about mood without much more. Flash Fiction Online aims for stories and characters, and its March issue provides three examples.

“Small Wishes” is based upon the appearance of “wish-dragons,” which suddenly appeared in the night sky and granted wishes to those who saw them. The protagonist has suffered an accident and wants to wish away her injuries. But Carol Otte doesn’t go for the obvious, and the story is more than just a surprise punchline.

John Guzlowski‘s “The Last Man on Earth — A Mini Novel” is a series of vignettes as described in the title. The last man sees various things and reacts to them. It’s all very well written, but the events are just images of loss, and the ending is one that I rarely find compelling.

“The Cratch, Thy Keeper” by Matthew F. Amati is a horror tale set in a rural area where Hake Jones warns about various local rule, all involving the Cratch, a mysterious supernatural creature that seems to loom over everyone and which requires the people do certain things to placate him. But Slocum Joe disobeys the rules and . . . well, it’s a horror story, so you can guess what’s next. The situation is well handled, though.

Chuck Rothman‘s novels Staroamer’s Fate and Syron’s Fate were recently republished by Fantastic Books. He has stories upcoming in Daily Science Fiction and Temporally Out of Order. More info.