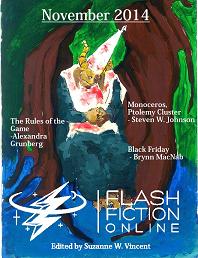 “Monoceros, Ptolemy Cluster” by Steven W. Johnson
“Black Friday” by Brynn MacNab
“The Rules of the Game” by Alexandra Grunberg

About law and death on an alien world, Steven W. Johnson‘s “Monoceros, Ptolemy Cluster” is full of bitterness and dust, mixing science fiction with Western sensibilities. Two old friends, neither human, find themselves on the opposite sides of the law, Renny trying to break it, Masok trying to uphold it. What they both yearn for is escape, though, from the planet they’ve settled on, escape back into the unknown of space where happiness is still a hope, however distant. They both get a bullet to the gut for their trouble, and while one of them does manage to escape, it’s not in the way he had hoped. Capturing the grim and dusty feel of an Old West shoot-out set on a far off planet, the story does an admirable job of giving the two characters a moment of dignity in a very undignified situation.

Brynn MacNab tells a vampire story with a bit of a twist in “Black Friday.” Instead of vampires being hunted down and killed, preying on the night, they are something more like drug addicts or sex offenders, put away into rehab and then taken out again. For the main character of the story, it means that their Uncle Joe, who was guilty of biting many people, has served his time and come to stay with them, taking up a basement bedroom designed to make him comfortable. For the main character’s father this isn’t enough, and when Uncle Joe is found dead, the family decides to tell the story that their vampiric relative couldn’t live with his past crimes, to make him into the noble man he should have been. Definitely not a typical vampire tale, “Black Friday” manages to tell a clever story about family and addiction while playing with the tropes of vampirism.

At a glance, “The Rules of the Game” by Alexandra Grunberg is about a chess game. A grotesquery that was once a man, Yue, now stripped of any attachment to the world save to the rules of chess, plays against the Dark Man, against death, while Li, the servant who looks after Yue, helps him play. Li, yearning for a day when she doesn’t have to serve, when the Dark Man will take Yue away, must still help the twisted and bloated man move his pieces. Only when she realizes that she must lose her own attachment to the rules does she find a way to help Yue move on and free himself from his suffering. Movingly told if a bit abrupt, the story edges around some big ideas while keeping things fairly simply. And while I liked the action and direction of the story, I wasn’t quite as convinced about the very end, though I think overall the story is well worth reading.