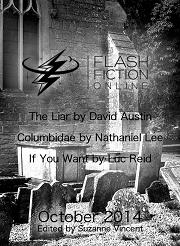 Flash fiction is a difficult form. It takes a lot of skill to tell a story in 1000 words or so, especially if you want to do more than come up with a punch line. Flash Fiction Online is a new magazine devoted to the subgenre, and the October issue features three genre stories.

“Columbidae” by Nathaniel Lee tells the story of Huey, a man on a ledge about to jump and who is told by a passing pigeon to fly. It works, and Huey starts living life as a pigeon. It’s clever with a sort of mystical twist.

David Austin contributes “The Liar,” about a man who shows up beside dying people and tells them comforting lies. I thought the idea was very powerful, and the ending showed that sometimes lies are better than knowing – or not knowing.

“If You Want” is the science fiction piece of the month, the story about a man who grew up making choices, most of which lead him down disappointing paths. Luc Reid goes for a metafictional ending that makes the story work well.

It’s hard to write in depth about this type of story, especially since any summary starts to give things away. And it’s extremely hard to create a powerful story in such a constrained genre. But the three stories all show strong promise by the authors involved.

Chuck Rothman’s novels Staroamer’s Fate and Syron’s Fate were recently republished by Fantastic Books. His story, “Ulenge Prime,” will appear in an upcoming issue of Analog.