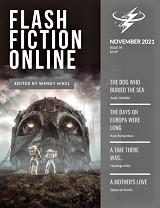 “The Dog Who Buried the Sea” by Andy Oldfield

“The Days on Europa Were Long” by Kyle Richardson

“A Time There Was” by Hastings Kidd

“A Mother’s Love” by Deborah L. Davitt (reprint, not reviewed)

All the stories in this issue deal with death in one way or another.

“The Dog Who Buried the Sea” by Andy Oldfield takes the form of a tale told by a bird to others of its kind. It relates how a man fed scraps to the birds from the food he gave his dog. When the man is ready to die, the dog and the birds pay him back for his kindness.

The author writes from the point of view of the bird in a convincing way. The plot involves a fantasy element, other than the bird’s narration, that seems out of place in an otherwise realistic story.

In “The Days on Europa Were Long” by Kyle Richardson, a robot arrives on a moon of Jupiter to help a dying man terraform the satellite, before Earth becomes uninhabitable. The machine resembles his daughter, and begins to take on that role as they work together.

As an emotional tale of loneliness and compassion, the story works very well. It is less effective as plausible science fiction. There is no explanation for why the robot was manufactured to look like the man’s daughter. The dying fellow is apparently the only person working to transform Europa into a livable world, which seems unlikely.

As in the first story, “A Time There Was” by Hastings Kidd features a dog. In this tale, however, it is a supernatural harbinger of death that a composer encounters as he faces his last days, struggling to complete his final work. His initial fear changes into quiet acceptance.

A brief note from the author (part of a longer interview, available to subscribers) explains that this story was inspired by the life of a real composer. Without this information, the work has less meaning to the reader.