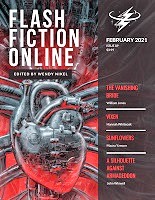 “A Silhouette Against Armageddon” by John Wiswell (reprint, not reviewed)

Editor Wendy Nikel of Flash Fiction Online has chosen a total of four stories for this month’s issue. The theme selected, as is fitting for the upcoming holiday, is human relationships and the myriad complications that arise from them. Of the four tales on offer, only one is a reprint and will not be reviewed here.

Five times the Duke has attempted to wed the lovely Lady Larian den Combasta and, five times, she has disappeared before the ceremony could be completed. It’s no mystery where she’s gone. Everyone knows that her former lover, the sorcerer Quesson, placed a return charm upon her years ago. The problem lies in convincing him to break it.

This is a cute story with endearing characters. I feel for Quesson, even though his actions are questionable. He’s not a bad person; he simply remains madly in love, even if the object of those affections no longer returns them. Relationships are indeed complicated things, and this story showcases that quite well.

Our narrator waits at a restaurant for her date to arrive. Having met on a dating website, it’s the first time she’s meeting him in person. When he finally arrives, there’s a vixen, a female fox, draped around his neck that eyes her suspiciously and growls at her. The date goes well until, a few months later, she asks him about the fox.

What a strange way to show up to a first date—with a live fox draped around one’s shoulders! That imagery alone is enough to draw one into the story. I quite like the use of the various animals to denote the emotional baggage and scarring each character brings with them to the relationship. It’s an excellent read!

Centuries ago, humans ruined the Earth. It’s now little more than a wasteland where nothing grows, and the air is so full of dust that it hides the sun behind thick clouds. Danilo’s lover, Edwin, has once again fallen ill, his lungs and body ravaged by the harsh atmosphere and wind-borne grit. At night, Danilo dreams of a world with two suns, where sunflowers grow and thrive, but this dream is dampened a bit by Edwin’s death. Now, Danilo must look to a future elsewhere.

Like so many flash fiction stories, it’s so hard to summarize this one without giving away too many details. This sad love story is well worth a read, though. I quite liked how the opening paragraph is a hint to what’s to come for Danilo after Edwin’s death, and the progressive interjected scenes that seem like dream sequences but perhaps are not. An interesting read, to be sure.