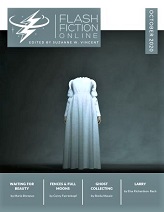 “Waiting for Beauty” by Marie Brennan (reprint, not reviewed)

Appropriate to the season, the three original works in this month’s issue deal with supernatural beings, either traditional or unique.

The narrator of “Ghost Collecting” by Sheila Massie, as the title implies, makes a habit of obtaining inanimate objects that contain the spirits of the dead. An ad offering to sell a haunted rocking chair leads to meeting with the owner, and a decision as to whether it should be purchased or left where it is.

Although the magazine describes this story as horror, there is nothing sinister about it. The various ghosts the narrator collects are far from malevolent, and the ending is optimistic. This gentle tale makes for light, pleasant reading.

In “Fences and Full Moons” by Corey Farrenkopf, a father builds a kennel to keep his young son, a werewolf, from escaping during his transformations. As the boy grows older and stronger, further measures are required to keep him from doing harm. The father has to choose whether to keep his child locked up behind ever more secure walls, or to allow him to roam free.

This story takes place in a world where lycanthropy is accepted as real, adding a sense of verisimilitude. The father’s dilemma is a difficult one, allowing the reader to empathize with him. The ending walks a fine line between honest emotion and sentimentality.

The title character of “Larry” by Elsa Richardson-Bach is a mysterious office worker. Nobody knows exactly what he does, although each has a theory, ranging from management to custodial care. The narrator witnesses Larry doing strange things, such as placing something that isn’t coffee into the coffee machine, and dragging a large, leaky trash bag full of unknown contents. Other weird details, from Larry’s overly large mouth to his misshapen shadow, suggest that he is something other than a normal human being.

If this synopsis seems vague, that’s because the story never explains Larry’s mysteries. The author creates an effectively creepy mood, but some readers may be frustrated by a lack of resolution.

Victoria Silverwolf is married to someone born in October.