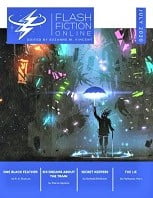 “The Lie” by Holloway Horn (not genre, not reviewed)

“One Black Feather” by R.K. Duncan

“Six Dreams About the Train” by Maria Haskins (not genre, not reviewed)

Flash Fiction Online is back this July with four more stories, only two of which are categorized as being within the genres reviewed by Tangent Online. Throughout the four, readers will find tales of relationships broken and repaired, of love and devotion, and of hope even in the middle of the darkest times.

“One Black Feather” by R.K. Duncan

James’s wife Lyla is growing wings again. Even though she tries to hide it, he knew it was true the moment he spotted a single black plume staining the sheets where she’d lain before leaving for work. He quickly throws it away, hoping this isn’t a return to the bad times they’d had in the past. The next morning, though, more black down litters the bed. Soon, the tell-tale spines are poking through the fabric of her shirt. Knowing from experience what this might mean for their relationship, all he can do is support her through this dark period.

It goes without saying that one of the difficulties of writing flash fiction is that it can be hard to fully develop the story. One only has so much space (usually less than 1000 words) to grab the reader’s attention and keep them oriented and engaged while still coming to a satisfactory conclusion. Frankly, I’m not convinced that Duncan was successful in this regard.

The overall premise is only mildly interesting—James is married to a woman with wings, and these appendages have created issues with their relationship in the past, making them a cause for concern now. The reason that this premise doesn’t reach its mark is because this is just too big a subject for such a short story and thus ends up being far too shallow. It needs more depth, especially given the underlying message the author intended to convey.

It’s obvious that Duncan means the wings to be symbolic of Lyla’s on-going battle with depression, and therein lies the problem with the story as a whole. The subtext is not enough to keep the story afloat. It’s certainly not enough to qualify this story as fantasy. To make this tale shine, as a reader, I need to know why Lyla has wings to begin with. By that, I don’t mean that I need to know the source of her depression. Again, that’s just the subtext and if it were to be explained in the narrative, it would further push this into contemporary and away from fantasy.

Instead, to justify this story’s classification as fantasy, tell me why this otherwise seemingly human woman has wings and how they disappeared, since they are now obviously growing back. Is she an angel? Is she half bird? Did she fall victim to some kind of scientific tragedy? If this is fantasy, then show me the extent of her “otherness.” Why are her wings such a problem and how did she lose them to begin with? I want to know something about who she is, who James is, their history together, where they came from, how they met. In other words, make this an actual work of fantasy. Give me a world in which to orient myself, however brief it may be.

The mere mention of a woman having wings does not under any circumstances make this a work of fantasy when it is so over-the-top obvious that the wings are symbolic of mental illness. It honestly reads like a contemporary tale about depression with a single fantasy-esque detail wedged in to make it fit a completely unrelated genre. One could quite literally substitute the word “depression” for every instance of the word “wings” in this story and absolutely nothing would change. It would still come across as a modern tale of mental illness, only it would be truer to genre.

The fact that the subtext is so blatantly obvious is also irritating. To make subtext like this work, it needs to be more cleverly disguised. It should be subtle and implicit—that’s why it’s called subtext to begin with. Make me work for the meaning. Give me something to ponder. Lead me to the desired conclusion; don’t hit me over the head with it. As written, it is incorporated into the story in a way that is akin to someone persistently shoving a flashing neon arrow in the reader’s face while screaming, “Hey! This story is about depression! Do you see it? Do you see the depression? Lyla’s depressed! The wings are depression!”

All in all, this story is a prime example of what makes writing a successful piece of flash fiction so difficult, especially in the fantasy genre. That particular genre, along with SF, often requires so much more worldbuilding and development, regardless of whether it’s set on modern-day Earth or a completely fictional world. It’s very hard to do that in less than 1000 words. As a result, “One Black Feather” struck a chord with one of my biggest pet peeves. Had the tale been classified as something else (like contemporary, for example), the story would have been perfectly fine. It simply should not have been classified as, nor does it work in any way as, a fantasy piece.

For centuries, the local villagers have whispered their secrets to the stones on the seashore when they couldn’t bear to keep the news to themselves any longer. Tonight, a man sits before a table, rocks of all sizes spread out before him. As his increasingly estranged wife wanders off to bed, he picks up his chisel and scars each stone, hoping they’ll spill their secrets as he ponders the issues in his marriage. After each one has been “opened,” however, they remain silent and he heads to bed disappointed, only to be woken later by shouting from the dining room. The rocks are finally ready to share their secrets.

There’s not much to say about McKimm’s story except that it is a fantastic tale and one that I highly recommend. It’s sweet, warm, and imaginative, and holds one’s rapt attention through to a very touching end. When it comes to subtext, the underlying message regarding the need for communication as part of any successful relationship is skillfully interwoven into the narrative, and the parallels the author draws between the stones and the narrator and his wife are lovely. I honestly do recommend readers check this one out for themselves.