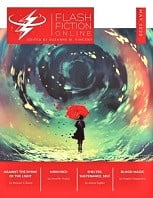 “Against the Dying of the Light” by Stewart C. Baker

“Shelter, Sustenance, Self” by Aimee Ogden

Although the concept of Mother’s Day has roots in ancient history going as far back as Greek and Roman festivals honoring goddesses like Rhea and Cybele, the modern celebration held in America each year owes its official implementation to Anna Jarvis. It was Jarvis who organized the first celebration of the American version in Philadelphia, PA on May, 1908. Today, the American holiday continues to be observed each May and, to honor that commemoration, this month’s issue of Flash Fiction Online centers around the notion of a mother’s love. There are four stories this month, each focused on this theme, with the final two extending to fathers, as well.

“Against the Dying of the Light” by Stewart C. Baker

Alyssa’s mother has an appointment at a state-of-the-art facility for the treatment of Alzheimer’s. It’s been hard seeing her mother’s memory deteriorate, but this new procedure promises wonders. And as a reporter, she’s also been given permission to write an article on the whole thing. The question is how much good can this treatment do?

Don’t expect massive SF thrills in this piece; you’ll be disappointed. Baker’s story is a human one, more in line with contemporary fiction that has a few SF elements incorporated into it. The impetus of this piece is one of family bonds and the pain of watching a loved one in slow decline, all while trying to figure out how to keep going. It’s very much worth a read.

Behind the mirror, a changeling watches the little girl whose place she had been meant to take. A human child in exchange for one made of mud and moss, spiderwebs and dew; that’s how it was supposed to work. But the child’s mother rejected the exchange and sent her back through the mirror. Now, years later, the changeling never stopped longing for a kind word and a mother’s love, and the opportunity to obtain may have just presented itself.

I’ve always loved fairy lore, and this take on changelings was unique and touching. At least, I certainly found it so. I’m sure there will be readers who, like me, catch the ever so slight scent of horror at the end, but that doesn’t ruin the tale’s charm by any means. It only makes it that much more intriguing. I highly recommend this story.

Nora hasn’t much time—her infant daughter is dying and the tide is nearly at its peak. She must complete the spell before it reaches its zenith if she’s to save her child, even if it means sacrificing all of herself in the process.

It has been said that little is more powerful than a mother’s love, and it is this saying that makes up the basis for Teagardner’s story. The imagery and action, especially in terms of the ritual itself as well as the preparation for it, are both well-crafted and researched, and the entire thing ends on an uplifting note. This is another that I’d recommend to readers.

“Shelter, Sustenance, Self” by Aimee Ogden

Phil’s wife, Mira, and their daughter, Christy, stand in the hospital room with him. Of course, this isn’t quite their Phil—that Phil is dead, having succumbed to a terminal illness. This Phil is a facsimile, an amalgamation of wires and gears onto which the deceased Phil’s memories have been encoded. While this Phil can’t feel for them the way his predecessor could, the memory of love for his family is still strong.

Of the four stories in this issue, this is the only one that deviates fully from the matricentric theme, which I thought, in the spirit of equality, was nice. That said, it took me a minute to get into Ogden’s story, mainly because of my initial confusion over Phil’s condition. It’s clarified fairly early on, but I still couldn’t help but be a bit disoriented at first with the way Phil’s unique condition was introduced. That aside, it’s a lovely story of the enduring love a father has for his offspring, even after the loss of the physical apparatuses that make genuine emotion (at least, emotion as we know it) possible.