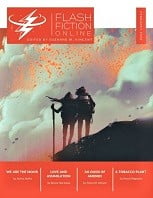 “We Are the Moor” by Sylvia Heike
“A Tobacco Plant” by Anonymous (reprint, not reviewed)
“Love and Assimilation” by Bryce Heckman
“An Oasis of Amends” by Floris Kleijne

All three original stories this month deal with the loss of a loved one in unusual ways.

“We Are the Moor” by Sylvia Heike is narrated by ghosts who inhabit the flora of a field, communicating as a group mind. A woman who died just before she was to be married refuses to join them. Instead, she forms a body from plants and visits the man she loves.

This is a poetic and gently melancholy tale, full of sincere emotion and appreciation for nature. By presenting mourning from the point of view of the deceased rather than the survivor, this common experience seems new, resulting in a powerful story of learning to let go of the past.

The narrator of “Love and Assimilation” by Bryce Heckman is an artificial intelligence within a gelatinous body. Before the story begins, it fell in love with another of its kind, and they pledged to become one. Before that could happen, however, a woman thought the beloved was a jellyfish, and killed it. The narrator enters her home and uses its power of absorption in a quest for revenge.

The premise is imaginative and original, with many detailed descriptions that make it seem real. Flashbacks make the plot difficult to follow, requiring rereading for full understanding. The mood of the story is a combination of tragedy and comedy that does not always strike the right note.

“An Oasis of Amends” by Floris Kleijne takes place in a future of severe climate change. The narrator’s spouse died during a disastrous flood. A technologically advanced project to restore a damaged environment serves as a gesture of hope, making the narrator’s loss more bearable.

No matter how one may feel about the politics of environmentalism, this is an effective study of bereavement and the effort to overcome it. The science fiction content manages to be both awe-inspiring and believable, as well as relevant to the theme.

Victoria Silverwolf notes that this issue’s reprint comes from Punch, the famous British humor magazine. Due to some sort of numerical spoonerism on the part of Flash Fiction Online, it is impossible to tell if it first appeared in 1914 or 1941. It served as a source of amusement during the dark days of a World War, anyway.