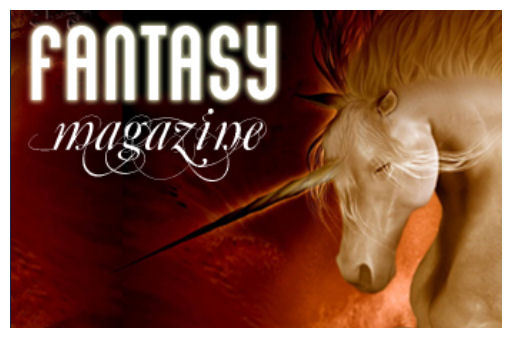 This issue of Fantasy Magazine is the last before it merges with Lightspeed with John Joseph Adams – editor of both magazines – emerging as the new publisher.  The merge will see the same number of stories published in the same genres, but with the stories all published under the one magazine title.

Perhaps there’s a touch of serendipity in the choice of stories this month.  Both are about transformation and the ending of things – suitable given the merge.

The first offering is “Her Lover’s Golden Hair” by Nike Sulway.  This is a beautiful piece of writing about grief for a lost lover.  The unnamed protagonist returns to the house previously used as a weekend retreat by herself and Lily, her recently-deceased love.  She returns with their dog, Gilbert, and a hank of Lily’s long, blonde hair.  There, she is surrounded by reminders of the past and her lost love.  Will she be able to deal with her grief?  Will she be transformed by it?

Sulway does a beautiful job creating atmosphere and poetry.  Towards the end it tilts to the overwrought, but otherwise Sulway finds a nice balance.  The story reminded me, in some ways, of Robert Browning’s “Porphyria’s Lover.”  There is the same sense of being strangled by a surfeit of love, although Sulway’s story is less literal than Browning’s poem.  The story deals with real emotion, grounding the fantastic element of a literal physical transformation with a powerful sense of emotional transformation. A wonderful, dark and poetic story.

“Crystal Halloway and the Forgotten Passage” by Seanan McGuire deals with a different kind of ending.  Crystal is a hero in the land of Otherways, a fantastic world that exists through a passage in the back of her wardrobe which she found “by accident when she was six, playing at seeking Narnia.”  She is now sixteen, and has adventured, on and off, in Otherways over the last ten years.  She even had her first kiss there.  Over time, Otherways has become as real, or more real, to her than the mundane world.  She knows that someday she must make a choice: should she live, for good, in Otherways, or should she make a life for herself in the real world?  The passage to Otherways is narrow, and she will not always be able to find her way down it.

Fantasy readers will instantly recognise the theme of making a choice between fantasy and reality – it’s a choice we make every time we vanish into the pages of a good novel.  The idea that when we grow up, we need to decide to live in one world or the other is familiar, too.  Think of the children of Narnia who are barred from that magical place once they grow up.  The theme’s good, but it’s not explored in any real way.  The fantasy seems derivative; Crystal’s journey through the wardrobe is far too close to the Narnia novels for comfort, even if the author mentions the link explicitly.  Crystal’s previous adventures all sound like D&D campaigns, and we first find Crystal slaying a dire bat with a dagger – sticking “dire” in front of the name for an animal is an easy way for D&D game designers to fill out their bestiaries without having to get creative.  The ending of the story undermines the interesting theme of growing up and choosing between fantasy and reality by removing the choice completely using the lamest pun possible.  It’s a story with potential, but it doesn’t come close to realising it.

So, some mixed offerings this month, but both stories, in their own way, seem appropriate as we say goodbye to Fantasy Magazine as an independent entity and welcome the newly re-conceived Lightspeed.  Adams has moved both magazines from strength to strength, and with no other real change than that of the format, branding, and having the editor as the publisher, the future continues to look bright.

Grief is inescapable when it takes hold. It sinks deep into the fabric of reality – suffuses thought, space, and time with shades of sorrow, until nothing is left but the recognition. Lily is dead. Now, a braid of her golden hair is all that remains for her bereft lover to cling to.

Sulway’s piece is an exploration of loss. The protagonist (unnamed, to contribute to the idea that she is losing herself in sorrow) returns to their old house, and the world itself seems to bite and claw at her, now that her partner is gone. Sulway delves deep into the mind of her character, and every detail of the piece, from the sad sniffling of the family dog Gilbert, to the high-handed allegories of timeless towers and women that turn into birds, is designed to evoke a facet of her grief.

It is a difficult, bitter piece, comprised of dark and occasionally meaningless prose, that left me feeling quite uncomfortable. The writing itself has merit, and one paragraph stands out above the rest – a description of a dream, in which “the soft rot of time clutches at her ankles” – but poetic appeal does not always equal an enjoyable story. I would also argue that there is no real fantasy in this piece; the “fantasy sections” are all allegorical, and so tread an awkward path between magic realism and metaphor, which could disappoint some readers. The protagonist doesn’t actually turn into a bird, for example.

This is a piece to be appreciated, not enjoyed; read it for the artistry, and for something to think about, but be prepared for it to suck the happiness out of you. For those who prefer to listen to the podcast, Gabrielle De Cuir’s reading is a little on the melodramatic side for my taste, but inoffensive enough.

“Crystal Halloway and the Forgotten Passage” by Seanan McGuire

In the land of Otherways, evil roams, and threatens the peace of the Endless Fields. Crystal Halloway is its champion, and she has protected the land ever since she can remember. But each fortnight, when light shines again from the Passage Star, she is forced to return home, to a normal life of college, exams, and fretful parents. Otherways is left vulnerable. Now, with her eighteenth birthday looming, the time to choose between worlds has arrived, and Crystal must be watchful as her enemies close in for a final assault.

McGuire’s piece is a surprisingly poignant tale about the loss of innocence and imagination – about the death of childhood. It starts out as a frustrating, childish story about dire bats, talking spiders, and a land filled with characters like the Princess of Thorns and the Rose Queen. These fairytale elements seem quaint at first, but soon become grating through sheer quantity. Some readers may be put off by one too many references to the Old Man of the Frozen North (or to any number of other characters with capital letters and prepositions in their names), and it is not clear that this is by design until near the end.

Nevertheless, McGuire’s conclusion makes up for this effect, and ties together such perceived faults in the prose. This is a quick story, with little in the way of combat or intrigue to speak of, but the mystery of the faceless children sets up the final conflict quite nicely, and McGuire’s closing scene – a comment on the sacrifices we all make on our journey into adulthood – proves to be thought-provoking, poignant, and even a little wrenching. This is a good rounded piece that tugs on the heartstrings.