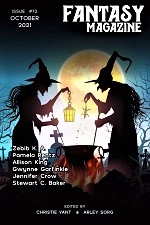 “Breath of the Dragon King” by Allison King

“Emily and the What-if Imp” by Gwynne Garfinkle

Two short stories and two works of flash fiction appear in this issue.

In “Breath of the Dragon King” by Allison King, a girl is born on the last day of 1987 instead of the first day of 1988, as her parents wish. The reason this is important is that 1988 is the Year of the Dragon and 1987 is the Year of the Rabbit. The parents conceal the true date of her birth, naming her Dragon King. She grows up expecting to have the magical powers of a dragon, such as breathing fire, when in fact she possesses rabbit magic instead. Despite this deception, she manages to succeed in her own way.

In less than one thousand words, the author presents an intriguing fantasy concept based on the traditional Chinese zodiac. The brief length is something of a double-edged sword, however, because it leaves the reader wanting to know more about the girl’s further adventures as a rabbit disguised as a dragon. (The fact that the protagonist has the same last name as the author is surely not coincidental, and one would like to have a better understanding of the connection between the creator and the creation.)

The narrator of “Heirlooms” by Zebib K. A. is a young woman living in a New York apartment. Homeless people occupy a nearby park, until they are driven out by police. After they leave, the narrator sees them crawling up the outside wall of the apartment building, in an impossible fashion, to reach the rooftop garden. A further encounter leads her to see them as people rather than the monsters they seemed to be.

The plot is obviously intended to deal with issues of homelessness and social class in an allegorical fashion, and the point of the fable is clear enough. What is less transparent is the story’s view of racial issues. The narrative emphasizes the fact that the narrator and her roommate are African-American, and that the apartment building is in Harlem, occupied mostly by whites. The homeless people are also white, at least those who are described in any detail. What the author is trying to say about race escapes me, although it appears to be a vital part of the intent of the work.

“Emily and the What-if Imp” by Gwynne Garfinkle deals with a woman and a supernatural entity that tempts her to do bad things, inspired by her reading. When she is a girl, it suggests that she imitate the characters in a children’s book and run away from home. When she is an adult, it suggests that she stabs her boyfriend, as a character does in a novel she is reading. The woman learns how to beat the being at its own game.

The premise reminds me of Edgar Allan Poe’s 1845 tale “The Imp of the Perverse,” in which a murderer confesses to his crime, although he knows it will lead to his execution. Whether or not the author deliberately intends to allude to this psychological chiller, the current work is much lighter in tone, as the woman easily resists the imp’s temptations. There is also an implication that such troubling thoughts can be used in a positive way through fiction. In any case, this very short story is an enjoyable, if minor, flight of the imagination.

In “Obstruction” by Pamela Rentz, a woman, who is actually an ancient spiritual being from Native American folklore, leaves another of her kind behind, who then becomes a river spirit. After wandering the world for many years, she returns to her native land. The river, a sacred place for the local indigenous people, is being used for a reality TV show about kayaking. The spirit-woman discovers a way to stop this degradation of a holy site while also making a decision about her own future.

The author is a member of the same indigenous people as those in the story, so the setting and the mythology is vivid and authentic. The story’s political stance is obviously on the side of preserving Native American sacred grounds from being used for secular purposes by outsiders. Aside from this potentially controversial theme, the work offers an interesting character study of a supernatural being who is very human. The story’s main antagonist may come across as a stereotypical thoughtless white man, ignorant of the importance of the sacred site.

Victoria Silverwolf is drinking some canned water with a brand name appropriate to Hallowe’en; to be specific, Liquid Death.