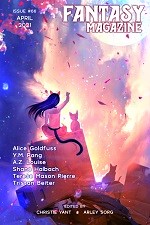 “The Woman With No Face” by Alice Goldfuss

“So. Fucking. Metal.” by Shane Halbach

“How I Became MegaPunch, Or, Why I Stayed with Dylan” by Y.M. Pang

Four new stories, three of them quite short, appear in this issue.

The narrator of the brief tale “Single Origin” by A.Z. Louise waits for days to enter the residence of a witch, in the company of a woman. The witch offers them their choice of many different containers of coffee, leading to the revelation of their wishes and the witch’s identity.

In essence, this is a love story, with the two main characters finding each other through their complementary wishes. The plot is simple, but the vividly realized setting is effective. The ending, in which the nature of the witch is revealed, may strike some as overly enigmatic.

“The Woman With No Face” by Alice Goldfuss mixes fantasy with science fiction. On a planet where people have the ability to share their minds with others, a woman has the much more dangerous power of completely taking over bodies, leaving them dead when she switches to a new one. Using this deadly skill, she leads a rebellion against invaders from another world.

The story alternates flashbacks to the woman’s discovery of her grim talent with scenes in which she is interrogated in a simulated environment, by an enemy who does not realize her true identity. The use of both technology and magic, combined with this narrative structure and multiple levels of reality, create a plot that is difficult to follow. Readers may find it worthwhile to make the effort to appreciate a complex tale, despite an unsympathetic protagonist.

Well under one thousand words long, “So. Fucking. Metal.” by Shane Halbach features a rock band made up of demons and death deities. The narrator’s sharply contrasting magic power leads to an unexpected partnership. This tiny story may amuse fans of heavy metal music.

The narrator of “How I Became MegaPunch, Or, Why I Stayed with Dylan” by Y.M. Yang develops superpowers during a fight with a lover. That’s really all there is to the plot. The argument makes up the bulk of the story. This bagatelle may be appreciated by those who enjoy silly comedy, but even at slightly over two thousand words it overstays its welcome.