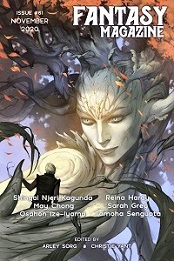 “And This is How to Stay Alive” by Shingai Njeri Kagunda

“An Introduction” by Reina Hardy (not reviewed – non-speculative)

“To Look Forward” by Osahon Ize-Iyamu

“Love Laws and a Locked Heart” by Tamoha Sengupta

After a hiatus of four years, Fantasy magazine is back with its 61st issue. There are four original short stories in this 61st issue, including one flash fiction. Welcome back.

“And This is How to Stay Alive” by Shingai Njeri Kagunda

In this SF short, Kabi is struggling with the suicide of her younger brother Baraka. After Kabi had discovered his swinging body, she wonders what she could have done to help Baraka. That morning he’d tried wearing her eyeliner for the first time.

A distant cousin gives her a bottle, promising her this would help her sleep. But instead of helping her sleep, the potion transports her mind back to her earlier self. And back to that last morning of Baraka’s life and a chance to do it over again.

This was an unusually structured story that worked well. It was a thought-provoking look into the consequences of bigotry.

“To Look Forward” by Osahon Ize-Iyamu

A girl is graduating from junior to senior school in this short fantasy. Her three friends all seem to know what they want to do in senior school, but when her mother asks her if she wants to do science, art, or social studies, she is undecided.

Whenever they aren’t in class, the four friends dedicate their time to the swings, trying to soar higher and higher. Each reaches new heights, enhancing their iridescence. But the undecided girl feels left behind. Maybe she is destined to be one of those trapped in life.

The speculative elements were light. However, the story was interesting as an exploration of a young girl’s coming of age and making a life-defining decision so early.

“Love Laws and a Locked Heart” by Tamoha Sengupta

A wizard locks the heart of Princess Nivedita in this very short fantasy. No one can unlock the one-year-old’s heart, and she grows up as a cold and heartless young girl. Her only love is archery, and she quickly becomes the best in the land.

As a teenager, she meets Ananya, and though Nivedita doesn’t understand her feelings, Nivedita develops a forbidden love for the girl. The King isn’t pleased. He won’t blame his daughter, but he does decide to punish Ananya. A move with unforeseen consequences.

This story was barely longer than flash fiction, and though the plot had an interesting tale to tell, the author delivered it bluntly.