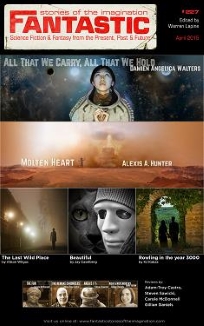 “All That We Carry, All That We Hold” by Damien Angelica Walters
“Molten Heart” by Alexis A. Hunter

Focusing on a woman growing up in the shadow of enormous ships that take people to the distant stars, Damien Angelica Walters‘ “All That We Carry, All That We Hold” mixes sadness and loss in equal measures with hope and revival. The story is generational in some ways, at first showing the main character as a young girl afraid of the ships, and then showing her grow, as her relationship with those ships and the people leaving the planet becomes more complicated. Eventually she gets married and has a child, and the ships are present through it all, the backdrop to the tragedy that unfolds. The main character’s marriage falls apart, and her husband leaves on one of those ships. They act as a focus for the woman’s grief, for her pain, and yet to her daughter they are hopeful, they are amazing. And then the daughter gets cancer and dies. It’s a gut-punch moment, but also one that finally forces the main character to face the ships, to see them through her daughter’s eyes, and it’s what prompts her to take a ship far away, to an entirely alien world where she can grieve and perhaps move on with her life. The prose is elegant, the structure effective as it jumps forward in time to show the poignant moments in the main character’s life. It’s not a happy story, but there is a hope to it, a sense that the beyond is not something to be afraid of, that sometimes it takes the wisdom of a child to show the folly of age.

Another story that deals with raising children, “Molten Heart” by Alexis A. Hunter shows a golem on Mars that is created to care for a human girl until her thirteenth birthday. It’s a convenience for busy parents, and because they don’t want their child getting too attached to what is basically her nanny, they don’t give the golem a mouth or eyes or a human shape. But still the young girl loves the golem that raises her. And the golem loves her, even though it turns out to be a doomed love. As an additional way of keeping golem and child separate is that the golem will only live to the child’s thirteenth birthday. But still the golem cares for the child and the child cares for the golem. And the child tries to prevent the golem from dying, but nothing works, and the two are forced apart. The magic that created the golem’s body, though, didn’t create the consciousness, the person, that inhabited the golem shell. And so though the golem’s body fails, it’s consciousness continues as a part of the planet, waiting, until that young girl grows up and has a child of her own. At which time the woman uses magic to summon the golem back, only this time with a mouth, with eyes. It’s a sweet story, very short and with a heart-warming ending as the two people refuse to be separated, as they find a way to be together again. Pairing quite nicely with the previous story, it makes for a rather tear-jerking issue overall.

Charles Payseur lives with his partner and their growing herd of pets in the icy reaches of Wisconsin, where companionship, books, and craft beer get him through the long winters. His fiction has appeared or is forthcoming at Heroic Fantasy Quarterly, Nightmare Magazine, and Lightspeed Magazine‘s Queers Destroy Science Fiction, among others. You can follow him on Twitter @ClowderofTwo