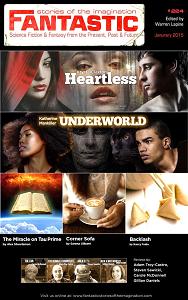 “Heartless” by Krystal Claxton is an odd, but good, story. It is narrated by an unnamed “Shebeast” who, raised to feed on men, has turned her back on that life and lives alone in the woods healing them instead. Our narrator finds a man in the woods near her house one day, left for dead by another one of her kind. She nurses the man back to health, which draws the other Shebeast back to finish the man off. It’s an interesting story. You’re not quite sure where it’s going when it starts, but it quickly and gracefully resolves itself into a fairly skillful allegory. In this world, words and feelings can injure or heal on an external or physical level as surely as they can on a psychic or emotional level in our world. It is an interesting take on loss, heartbreak, love and the power of the words we choose to use. Worth your time.

On the other hand “Underworld” by Katherine Mankiller is, to be charitable, not good. It attempts to tell the story of a teenager who, while trying to rescue his mother from what he thinks is the “Greek Mafia” realizes that he is up against modern-day versions of the Olympian Gods and that he himself is a demigod. It is amateurish in construction, the dialogue is tin-eared and stilted, and the author quickly loses sight of “show, don’t tell.” The story also turns at about the halfway mark into a particularly grating type of wish-fulfillment wherein the protagonist is the best and coolest and most skilled and whatever minor flaws he might possess don’t really matter. All in all I would say that while there is the kernel of a decent idea there, the execution is lacking and leaves very much to be desired. If tales of modern Olympians are what floats your boat, this has been handled in a more interesting fashion elsewhere and I would suggest you seek those alternatives instead.