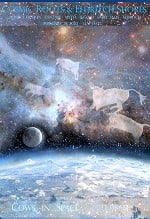 “Cows in Space” by J. Drake

“Cows in Space” by J. Drake

This is a light, playful short story. It is fanciful but still relevant to human nature and tendencies. The title pretty much says it all: a race of beings from beyond the stars that happen to behave much like a herd of bovines (even if they bear little physical resemblance) appears looking for a new pasture to graze. Set on the planet Doj in the New Kansas territories, it is no doubt deep into the future. The story follows the Marshal, lawman and captain of the Sybelle and its crew. Interlopers are rarely greeted with welcoming arms, especially those with radically different physicality, and it is not long before poachers and the simply ignorant and irate show up to raise hell. Much like vultures, though, these creatures are not helpless, and have a rather nasty response to threats. The crew gets more than a passing familiarity with the creatures… and even grow a bit fond of the “space cows” as the Marshall upholds the peace. I mean, you wouldn’t have space cowboys without a herd to follow, right?