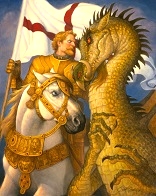 “The Trial of St. George” by Andrew Jensen

“Up Sticks” by Liam Hogan

This month, Cosmic Roots & Eldritch Shores has two stories, with one a special release for St. George’s Day.

“The Trial of St. George” by Andrew Jensen

In this short and quick fantasy, the government prosecutes Saint George for killing the last dragon, violating the law against making a species extinct. He may think it’s all a bit much, but the barrister warns him of the consequences. What’s worse, the typically inept prosecutor has suddenly become one of the brightest legal minds in England.

The author’s story snippet was a pleasure to read with a witty touch and an engaging style.

“Up Sticks” by Liam Hogan

Number 24, Fell Street, searches for its owner in this short fantasy. The semi-detached house lifts itself from its foundations and waddles across the town, causing consternation wherever it goes.

After encounters with derelict houses and a pub, it finds an old church that knows of 24’s owner and directs it to another old establishment nearby. Here, 24 may find the answer to the riddle of its missing owner.

Though this was a charming story to read, its cuteness lay in it being about a house doing something ordinary for a human to do.