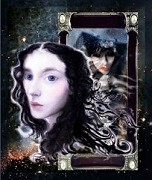 This is unashamedly a fairy story and is told in that style. This necessarily leads to slightly two-dimensional characters, which is not necessarily a bad thing. It is the problem and its solution which are important. The story also benefits from some haunting artwork that offers a clue to both of the above.

We first meet Hima as an adolescent princess growing up in a fairy-tale land of balls, gowns and gaiety. The gradual introduction of darker elements such as a magic mirror, a beautiful but vain mother and a last surviving dwarf may lead one to believe this story is a straight retelling of a familiar fairy-tale from your youth, if so, you would be wrong.

Hima’s character is revealed well enough for the reader to empathise with her gradual discovery that she, her parents and all other characters are but ciphers in a never-ending drama—players who strut their moment on the stage to the tune of an ancient curse and then are fated to repeat it forever. Hima’s attempt to break the cycle and thus control her fate forms the crux of the story, but to say more would spoil the story’s intriguing resolution.

Geoff Houghton lives in a leafy village in rural England. He is a retired Healthcare Professional with a love of SF and a jackdaw-like appetite for titbits of medical, scientific and historical knowledge.