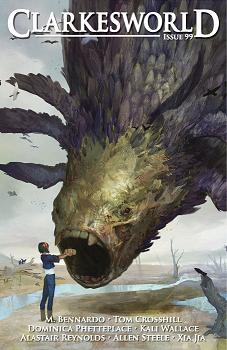 “Fatima’s Wound” by Kali Wallace
“The Magician and Laplace’s Demon” by Tom Crosshill
“Now Dress Me in My Finest Suit and Lay Me in My Casket” by M. Bennardo
“No Vera There” by Dominica Phetteplace

The warden of a strange prison looks back on a long life as the wound in space that she has been launching the condemned into begins to change in Kali Wallace‘s “Fatima’s Wound.” Fatima, herself the survivor of a sort of slave rebellion that she instigated on her home world, has long sent prisoners into the wound, a portal in space, as a sort of penance for her life’s violent arc, for the darkness in her heart. Only, when something begins to emerge from the wound, something huge and terrifying, she finds things around her changing. All the prisoners and all the staff, everyone except Fatima, choose to flee, to send themselves into the wound rather than face whatever is coming out. Fatima just reflects on her life, on her escape from the deadly mines of her homeward, on her ascension to revolutionary, on her life as First Counselor of the prison. And instead of fear she finds a renewed purpose, remembers why she began her work and resolves to meet whatever is coming out of the wound head on. Dark and unravelling slowly, like the thing from the wound, the story builds up Fatima and her work nicely, paying off with that final image of Fatima waiting. The story seemed much longer than it really was, which in this case is a good thing, drawing out the moments of quiet questioning and desperation and leading inevitably to each new revelation.

An artificial intelligence and a magician square off in a struggle spanning thousands of years in “The Magician and Laplace’s Demon” by Tom Crosshill. The AI, acting on its primary goals of protecting and bettering mankind, has made itself into a controller, manipulating everything from the shadows. And yet still things happen that defy explanation, and the AI is confronted with the idea of magic, of quantum improbability expanding to the macro stage and used by magicians to change the universe around them. After so many centuries, though, the AI has managed to kill and study all the magicians save one, and hopes that killing her it will finally unlock the last secrets of the universe. For something that feels ignorance as physical pain, the AI pursues its goals relentlessly, but finds in the last magician something that it never really anticipated, and their final confrontation is left deliciously ambiguous enough to keep the reader guessing. Layered with interesting ideas about the nature of magic and the role of the observer, the story plays out like a piece of clockwork, seemingly ordered but with a core of random chance. It winds down to the ending, everything graceful and delicate yet powerful and lasting, an unraveling of the AI’s plans. And definitely a fun read.

“Now Dress Me in My Finest Suit and Lay Me in My Casket” by M. Bennardo tells the story of Patty, a mechanic looking to sacrifice herself so that the rest of those on her spaceship can live. Being helped into her suit by another, Patty thinks back to her grandfather, who had the singular habit of dressing for death and sleeping in a casket in order to get himself used to the idea of dying. For Patty, she knows that if she goes to fix the hole in the hull, she’ll die from radiation poisoning, but is resolved to do it anyway, and with a little help from Doc, the woman dressing her, she finds the strength and resolve necessary to take that step and meet her end. While not a happy story, Patty remains an optimistic character, someone who knows herself and sees where all her grandfather’s preparation failed to really get him ready for death. Short and filled with small pauses, the story does a nice job of showing the gravity of Patty’s situation slowly sink in, and how it doesn’t destroy her, how she is able to keep going.

Dominica Phetteplace reveals an imperfect clone born a twisted image of her progenitor, who supposedly died, in “No Vera There.” The two hundred and first clone of Vera, she is the least mentally sound, the most corrupt download from the stored consciousness of Vera 0.0. Originally created by a past-worshipping cult and subjected to Buzzfeed-esque personality quizzes, #201 finds in the question and answer a sort of purpose, a sort of meaning. When she is rescued by the other Veras and brought to live in a commune of her fellow Vera clones, #201 falls back on that one thing, on her quizzes, and it is that trait that sets her apart from the others, that makes her unique. When it turns out that Vera 0.0 is still alive and arrives to scatter her clones, only #201 is let stay, because she has become a master of quizzes, and there is something irresistible about that, something that Vera 0.0 does not wish to throw away. Revealing both the strange pointlessness of personality quizzes but also their role to comfort and to act as mirror to our own longings, the story is quirky but sharp. With prose at times lyric and at times blunt, the story makes what seems a disorganized mess come together in an organic and satisfying way. It makes this a recommended story, the best kind.