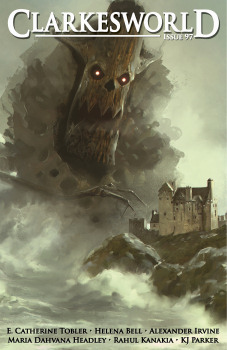 “Taxidermist in the Underworld” by Maria Dahvana Headley
“Lovecraft” by Helena Bell
“Seeking boarder for rm w/attached bathroom, must be willing to live with ghosts ($500/Berkeley)” by Rahul Kanakia
“Pithing Needle” by E. Catherine Tobler

This issue of Clarkesworld has an appropriately Halloween-ish set of stories, with several ghosts, a visit to hell, some cute little cthulhus, and a bloated dead man (the latter is a character in one of the two reprints, which I don’t review here, but is definitely worth a read). To round out the stories there’s a reprinted sword-and-sorcery twist and a dystopian science fiction alien tale.

In “Taxidermist in the Underworld,” by Maria Dahvana Headley, the Devil kidnaps Louis, the head taxidermist at a museum, bringing him to hell with the job of stuffing and mounting ghosts for the Devil’s trophy room. Louis tries everything he can think of to properly do the job—using clay, wire, papier-mache, even making ghost-balloons with helium—but the ghosts resist and dissolve and simply refuse to be proper subjects for stuffing. He despairs of ever succeeding at his task, meanwhile obsessing over Carl, the lover he left behind. In the depths of his misery, he learns that as is typical with dealings with the Devil, ulterior motives abound.

This story is available on podcast and is perfect for it, mainly because the scenes play out so nicely in the imagination—visualizing a taxidermist desperately trying to stuff ghosts while the Devil smiles urbanely in the background. I thoroughly enjoyed this story. It impressed me on three counts. 1) Content: the story is unique, surprising, and satisfying. I’ve never come across anything like the combination of elements here, and it’s so well done; 2) Tone: it’s light-hearted and amusing without trying too hard, which isn’t easy to pull off; 3) Craft: this woman is a master wordsmith.

In “Lovecraft,” by Helena Bell, Ann is a university student who interviews a middle-aged socialite for a project. During the interview, the woman casually allows a couple of baby cthulhus to emerge from a hole that appears under her collarbone. One she bashes to death, and the second flies away and hides in the curtain. Ann becomes fascinated with that one hiding cthulhu, and she returns, developing a relationship with both the woman and the cthulhu even as she helps the woman kill the other baby cthulhus that fall out of her chest on an irregular basis. Years pass, and Ann’s life intertwines with the woman’s and the cthulthu’s in continually odder ways.

This story is dark and surreal, but it did make me smile at unexpected moments, and the baby cthulhus evoke the same warm fuzzy feelings as puppies and bunnies. The writing is more concise and less antiquarian than Lovecraft, but the themes are completely appropriate to the title—we have the slimy tentacles and visceral substances, the detached academic as the heroine, sinister relationships, an inexplicable driving force behind the heroine’s actions or inactions, leaving her mostly helpless throughout the story, and unanswered questions at the end. I enjoyed the story, despite my dislike of unanswered questions—it uses the best aspects of Lovecraft and leaves out the annoying longwinded pulpiness and melodramatic weirdness. It’s effectively written and left me with some interesting mental images without grossing me out.

“Seeking boarder for rm w/attached bathroom, must be willing to live with ghosts ($500/Berkeley),” by Rahul Kanakia, consists of a series of six listings attempting to rent out a room in a house partially occupied by ghosts that are being stored in bottles after removal from places they were haunting. As could be expected, the narrator is having problems finding a boarder willing to live under these conditions, and through the progressive listings we see the narrator’s frustration and his attempts to explain what he does and problems he’s had, particularly with one past boarder who got too attached to one of the ghosts and wanted to free her. The plot thickens when he’s reported to a RentrBware site, which triggers some heart-to-heart revelations from the narrator.

I thought the concept of the story was really fun, and I found the story’s take on the compromised existence of ghosts both compassionate and amusing. The gimmick of writing a story as a series of rental ads didn’t quite work for me, though. I couldn’t imagine that anyone would write ads like those—lengthy descriptions of past tenants and problems with them, blow-by-blow revelations of encounters with particular ghosts that affected him, and all in beautiful narrative and dialogue. If someone were so unprofessional as to over-share during his listings, I would imagine he would be the sort who would ramble on and forget punctuation. So I give the author high marks for articulate and strong writing, and a great story concept—I just didn’t like the execution.

“Pithing Needle” by E. Catherine Tobler is a nerve-wracking story to read. Hermit-crab-like aliens called the Nessik have landed on Earth and have started an endless war full of mass death and destruction on both sides. In the midst of battle, a Nessik snatches the narrator in its mouth and takes her to a room in which more Nessik chitter at her. Then they stick something into her brain and she gets a glimpse of understanding of their history and their way of being and doing—seeing them starving and packed in their ship, seeing the way they perceive the world and why they’re driven to make war.

I had to look up what “pithing” is—and it’s when a needle is inserted in the base of an animal’s skull to immobilize it for dissection or slaughter. Even without the Internet’s help, though, I could surmise from the context that it’s like a forcible sort of merging, where understanding of the other is gained despite a commitment to seeing another as different. It’s an appropriate term for this story, as even the attempts to communicate and find some neutral ground are fraught with the feeling of being violated. How can you find a solution when nobody is wrong, but everybody’s needs conflict? This story expresses the hopelessness and the inevitability of knee-jerk violence that continues because the desire to survive always trumps reason.

Not a fun story—it taps into ugly emotions we don’t like to feel—but very effective, and darkly poetic.